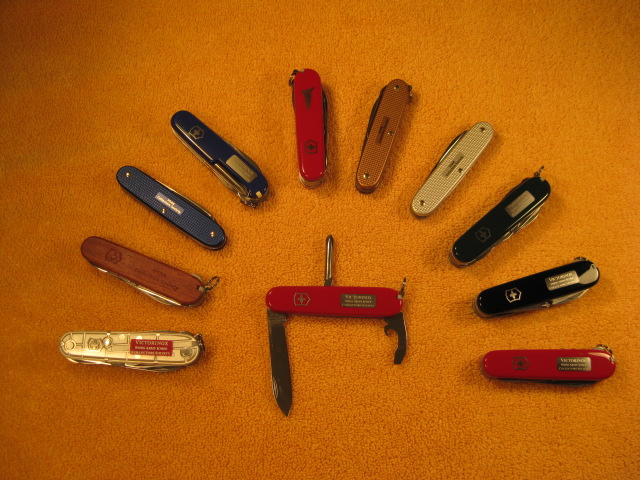 These models are issued annually by the officially recognized Victorinox Swiss Army Knife Collector's Society (VSAKCS). The society was more active historically*, however it still issues its annual knife and typically an annual newsletter - The Swiss Blade. - More details on VSAKCS below.

A different model is chosen each year, or sometimes, in more recent years, custom models have been created. They are only available in limited quantities, so are prized by many SAK collectors. This external site lists images of some of the earlier VSAKCS models.

Note: The VSACKS series should not be confused with the SOSAK Annual Knife Series which was another series of annually released knives issued by a different group.

Models in the Series

* 2004 Model Muddle !
There were two versions of the VSAKCS 2004 Soldier.
The original shipment, bearing the 04 Soldier date tang stamp and the regular Victorinox shield, somehow became lost in transit. The re-issue of the knife came with the Soldier shield and a date stamp of 05. The original shipment was found many months later, and ended up in a Victorinox warehouse sale at their Shelton distribution centre in Connecticut! Note: Both versions contained the regular VSAKCS 'Jahr 2004' blade etching.

To join the club please send your name, email and mailing addresses to the email address above.
Annual club knives are strictly limited to one per member per address, unless otherwise indicated.
The club aims to release an electronic general information newsletter at least once a year. Hard-copy may be available on request.
The club welcomes newsletter contributions and pictures from club members on anything Victorinox related.

Note: The club officials are the owners and operators of the Casco Bay Cutlery company in Freeport, Maine, USA.

The original club president, now retired, was Dan Jacquart, who was well known in the Swiss Army Knife community and who has written books and articles. During his time a quarterly hard-copy newsletter 'The Victorinox Blade' was issued.
Douglas Dillman, a former VP of Sales for Victorinox USA took over from Dan and has now handed over to the current president.