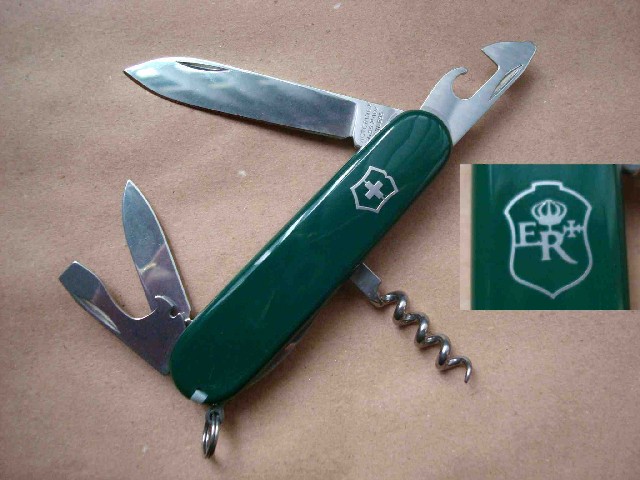 The Spartan is probably the most common, and well known, 91mm Victorinox Swiss Army Knife. It is a direct descendant of the historic Victorinox Officer's Knife, having essentially the same toolset as the original knife, but featuring the modern versions of the tools. It is available in numerous colors and handle designs - see 'Scales'.

Nearly all  Victorinox 91mm Swiss Army Knives contain the six main tools, and two scale tools of the Spartan. So it can be considered to be the base model to which all the other models add (and occasionally subtract** ) tools.
** Tinker based SAKs swap the corkscrew for a Phillips screwdriver;
Compact based models swap the small blade, openers and awl for the Combo Tool;
there are also other minor variations, to these base toolsets, in a few other models.

The Spartan usually has classic red Cellidor scales, however it is/has been available in several different colours including ruby, blue, sapphire, green, emerald, yellow, black, white, and camouflage. It is a common model for the beautiful 'Tourist'  picture knives, which contain iconic images of cities and landscapes from around the world, for example the Matterhorn in Switzerland, or the London Skyline. National flags and other series have also been made, it is also often used for corporate promotional purposes.
Many, many other colours, special designs, and scales with images, have been available in the past, and continue to be frequently released by Victorinox and its licensed partners.

The earlier 'Standard ' model was the predecessor to the Spartan and its name was a reflection of its early military heritage. It is almost identical to the Spartan, but with solid scales, which did not contain the tweezers or toothpick tools, and also usually did not include the keyring.

The original Spartan has the same tool set as the original Victorinox Officer's Knife so it is a direct descendant of that historic Swiss Army Knife. The later versions only adding the toothpick and tweezers.