The Victorinox Explorer is a standard 91mm model with four tool layers, and is one of the few smaller knives to contain the magnifying glass. The inline-Phillips screwdriver is also a very popular feature of this model. The Explorer was also available in a Plus variation, the Explorer Plus which added the 'Plus' scales and tools. 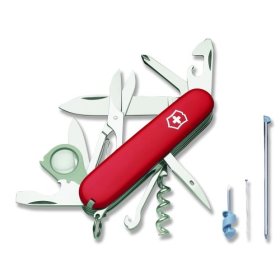 Available with red or black Cellidor scales other colours are also available.

US Model Numbers in brackets and below