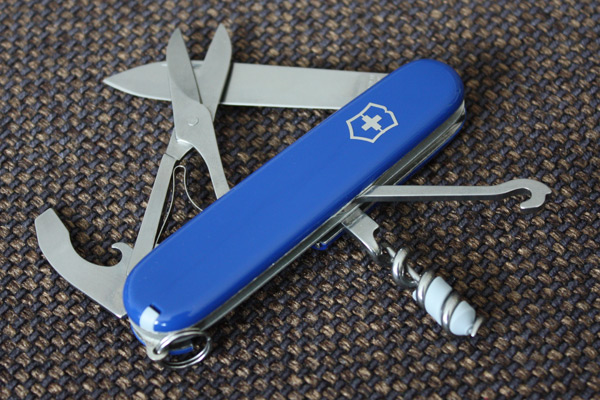 The Victorinox Compact is a two-layer Swiss Army Knife and is the thinnest currently manufactured 91mm model that includes the scissors. It replaces the the regular can-opener and cap-lifter tools with the Combo Tool, which occupies the position normally assigned to the small blade, allowing the model to be one layer thinner. It contains a large number of functions for its relatively small size.

The Compact is typically available with either red or black Cellidor 'Plus' scales. Other colours may also be available, possibly as custom configurations, or from certain dealers.

The direct ancestor of the modern Compact appears to have been the smaller 84mm Golfer, (the first model to bear the name 'Golfer'), which had the same features as the Compact, except for the hook and 'Plus' features such as the pen, pin and mini-screwdriver.
In 1987 the Golfer evolved into a  91mm model, to which a pen and mini-screwdriver were added.
The family tree split in 1991 into two distinct offshoots, both of which sported the multipurpose hook. One model continued to use the name Golfer, however the divot repair tool replaced the Combo Tool. This model unfortunately is now retired. The other model was the very first Compact which retained the features of the previous Golfer but added the hook and a straight pin. The nail-file would be added to the hook sometime later.

The very first VSAKCS annual club knife in 2000 was a traditional red-scaled Compact with an engraved panel on the top scale. The 2009 model was also Compact a with hardwood scales and a laser engraved shield and dedication, the scales did not contain the straight-pin or the ballpoint pen.