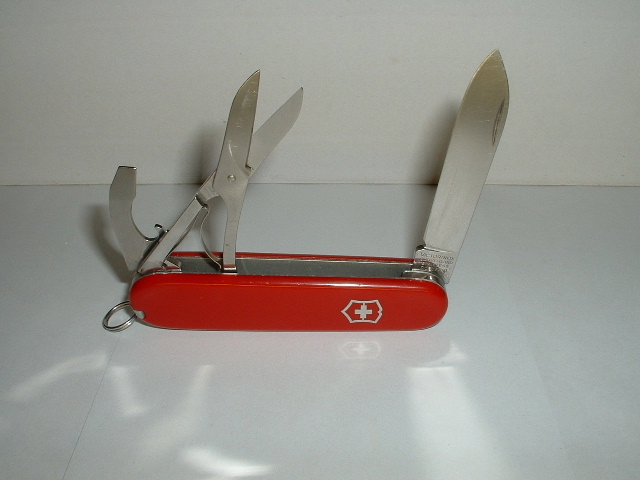 The Victorinox 91mm Golfer is a descendant of the 84mm Golfer.
Even though it was named the Golfer, the original version did not contain any tools specific to the game of golf! This anomaly was corrected by a later edition replacing the Combo Tool with the divot repair tool (see History).

The 91mm Golfer was later replaced with the uniquely framed GolfTool and the original version evolved in to the modern day Compact.

Standard red Cellidor scales. The later version has the image of a golfer screen-printed on the scales.
The ball-point pen was added, but no straight pin - as seen in this photo.

This model evolved from the 84mm Golfer.
The first version had the Combo Tool (with half-stop) instead of the divot repair tool and there was no pen.
The tools versions changed as the Victorinox tools evolved - Earlier versions having the the grooved corkscrew, and the scissors with the screw pivot.

The later version of this model replaced the Combo Tool with a golfer's divot repair tool and added the multipurpose hook (- later versions adding the nai-file/match striker to the hook), the mini-screwdriver, the pen and pin to the tool selection. This version typically has an image of a golfer screen-printed on the front of the scales below the logo.

The 91mm Golfer evolved into the modern day Compact, exchanging the divot tool for the Combo Tool, and the purpose designed and unique GolfTool joined the product line for the golfer, and this model was retired.