The keyring on a Swiss Army Knife typically consists of a small metal loop on a spring or liner, to which a small split-ring is attached. The split-ring provides a larger attachment point that is suitable for a lanyard, or to connect to a regular keyring. Wenger attached a small chain with split-ring to the metal loop on many of their 85mm models.

Between 1964 and 1992 Victorinox used a hollow rivet as an attachment mechanism on some Alox models. The rivet goes right through the scales and allows a lanyard to be attached by threading it through the rivet. Wenger continued to use this mechanism in their Soldier model until they no longer made Swiss Army knives.

Models with a USB flash drive have a split-ring attachment point built into the plastic flash-drive cover / release spacer.

Victorinox creatively include the keyring as a tool when counting the number of functions a SAK has. 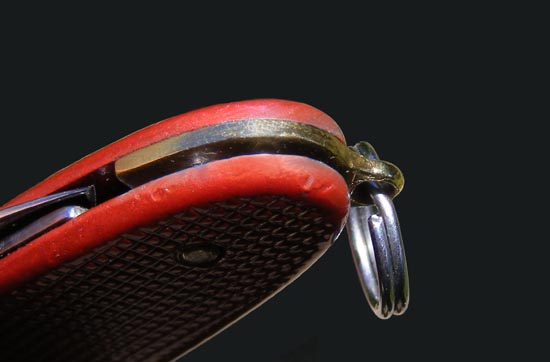