A number of different Victorinox Swiss Army Knife models contain a ballpoint pen in the scales. Those in the smaller 58mm 'key chain' models provide a very convenient way to ensure a pen is always within reach. If in a 91mm model, a pen can be very valuable during traveling or camping, or just for Every Day Carry (EDC).
The 91mm pen is housed in special 'Plus scales' of the knife. Users or dealers may change the scales of a model to allow a pen to be carried in that model, when it is not offered as standard from the factory. A pen has never been provided as standard by Victorinox in 84mm models , however some 'modders' have created custom scales to allow for a pen in 84mm models.

in 1985 Victorinox developed new Plus-Scales to enable a pen to be carried in some 91mm models (for instance the newly available SwissChamp). These scales have an additional cutout and slot on the corkscrew side of the scales that enable a removable pen to be inserted alongside the toothpick. This pen is much longer than the 58mm pen, measuring just shy of 71mm. Note: Later (1991), these scales also featured a small hole for a straight pin, which has now become standard in all models (although the pin itself is not always provided).

The pen is pressurized to allow it to be able to write at all angles. The longer length makes it somewhat easier to write with, but it is still as thin as the 58mm design, and thus impractical for extended use.
Some users place the pen against the spring under the multipurpose-hook, the tension from the hook will hold it secure. This allows the body of the knife to act as an extended body for the pen, similar to the retractable design, and greatly increases its ergonomics.

Victorinox's first 58mm pen was included in the Signature series of models. First released in 1993, it replaced the toothpick in the scales. The removable pen is very short, not more than 50mm in length, and extremely thin. Its thickness is comparable to the replaceable refill in a standard ballpoint pen. The small diameter and overall minuteness of the pen made it fairly impractical for extended use. It was discontinued in favor of a new retractable pen design.

Victorinox improved the 58mm pen in 1999 with the Signature II model. This model has a retractable, rather than a removable, pen. A small sliding mechanism is located in the scale next to the scissors, with a slightly exposed grey finger control button. Sliding the button down the scale causes the pen to extend from the small hole at the end of the scale. The button locks the pen in the extended position. This makes the pen an extension of the entire knife body, allowing the entire knife body to be grasped during writing, instead of just a thin tube.
For even more convenience, Victorinox recommends extending the nail file blade to provide more length for the 'body' of the pen (see image below). This design is far easier to use than either of the removable pen options, although still not as comfortable as most standard pens. see also: Retractable Stylus 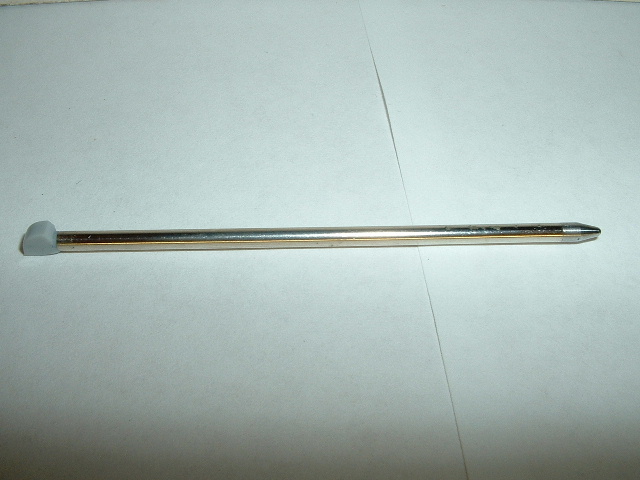 All SwissCards include a removable pen.
It is the same size as the 91mm pen, but with a symmetrical head, as opposed to the asymmetric 91mm pen head.