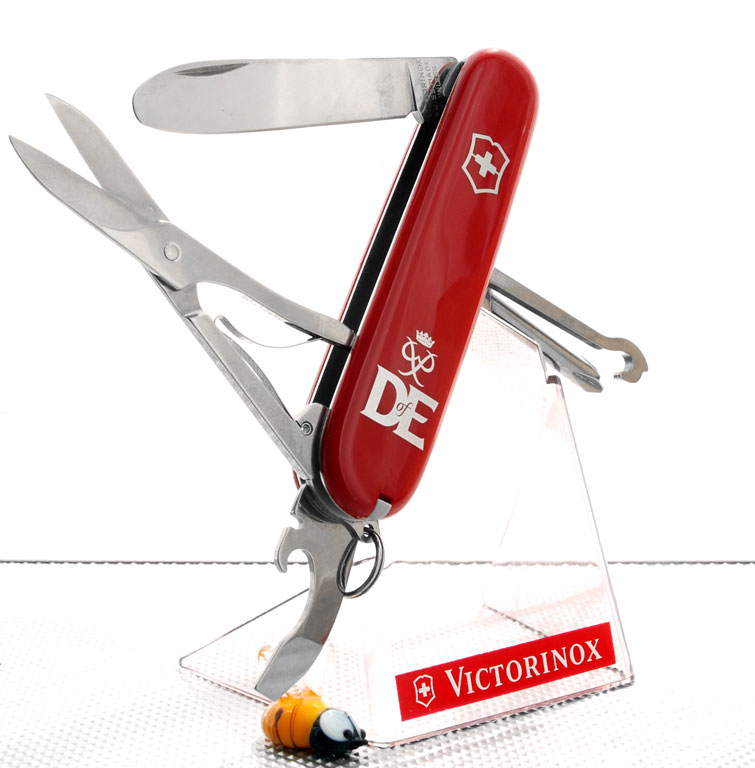 The Victorinox Duke of Edinburgh's (DofE) Award Pocket Tool contains a large number of functions for its relatively small size, and is the only 91mm model to have a round tipped blade. It was put together specifically for the DofE award scheme.

The tool configuration is similar to the Compact, replacing the corkscrew with a Phillips screwdriver. These models, (and the Compact-based Time Keeper), are the only 91mm models to substitute the separate can-opener and cap-lifter tools with a combo tool. The combo tool occupies the position opposite the main blade, that usually holds the small pen blade, allowing the models to be one layer thinner.

This model was not available in all markets and is discontinued (2017).

Red Cellidor scales with the DofE logo printed on the front.

This model was created specifically for the The Duke of Edinburgh's Award and was a recommended item in the DofE Expedition Kit List. It was available through the DoE website and many UK suppliers.
As of 2017 (?) the Victorinox DofE model no longer appears in the DofE website, or the Victorinox 2017 catalogue, and several UK stockists are also no longer supplying this model. - This is probably, and sadly, due to ever increasing anti-knife laws in the UK.