The Corkscrew is a classic tool. You might say it helped save Victorinox and the Swiss Army Knife as it was one of the new tools to appear on the Officer's Knife model in 1897. It could be argued that the Officer's knife was responsible for saving the company. Since that time many bottles of wine have been uncorked, and inventive uses for the tool have been discovered.

The groove in the corkscrew was dropped in 1991 (date in question), it has been suggested that this was a cost cutting measure, and that it was more decorative than functional. Information from Victorinox dated 2010.02.08 indicates that the grooved corkscrew was in production until 1994 (91mm).

Early versions of the Corkscrew have a significantly tighter spiral of smaller diameter that allows a full extra twist in roughly the same length.

Currently the legendary corkscrew is no longer made in Switzerland. According to a Victorinox Customer Service Representative in correspondence (2012.09), the corkscrew has been purchased from a French supplier as a semi-finished part for decades.

Although not everybody drinks wine, people have found a number of additional uses for the corkscrew tool. Some of these include the following:

Shown on upper image are 4 turn grooved and non-grooved corkscrews. The groove on this 91mm corkscrew is much less pronounced that that appearing on the 84mm 5 turn narrow corkscrew. Early 91mm corkscrews also had the deep groove, the change to the shallow groove and the thicker 4 turns was likely intended to increase the strength of the tool.

Shown lower image is the 84mm narrow corkscrew with a very deep groove.


The Corkscrew is a popular back-side tool on Wenger knives as well.

Note: it's just a little tight, but you can fit the Victorinox Mini-Screwdriver into at least some of the recent Wenger Corkscrews.

The Wenger 85mm Corkscrew was manufactured in both a 5, and later, a 4 turn design. 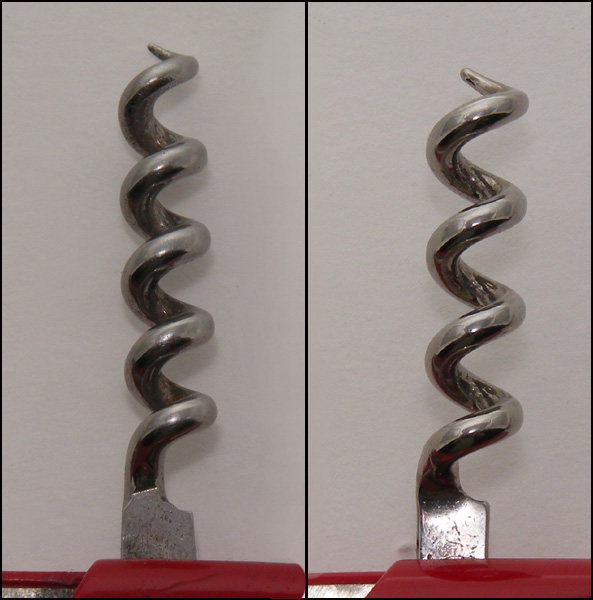 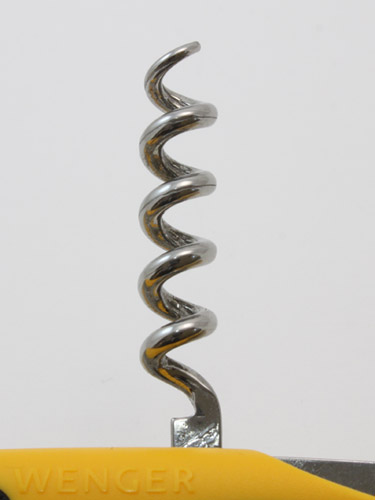