The can-opener is a tool with a lot of history.
The can-opener appeared on the very first Swiss Army Knife in 1891. The original design was dedicated solely to the task of opening cans and was somewhat awkward to use. Between 1945 and 1951 Victorinox supplied their Officer's models with a can-opener almost identical to the Wenger can-opener below. The Soldier models continued with the original can-opener until the 1961 Soldier was introduced, when they switched to the current design.
The contemporary version (patented 1951) is much easier to use than the original, and also has the addition of a small slotted screwdriver that can also be used for Phillips screws. The width of the screwdriver end is roughly 3mm and the steel has a hardness of RC 52. When this tool was introduced the can-opener and screwdriver swapped positions in the frame of the knife.
The blade on the contemporary version is more versatile and has been used with wire shielding, snap-back watch cases, and other small blade short-cut duties where the shorter tool length, and thicker blade, provides better control.
The can-opener tool now also has a much 'younger' cousin, the Combination Tool. 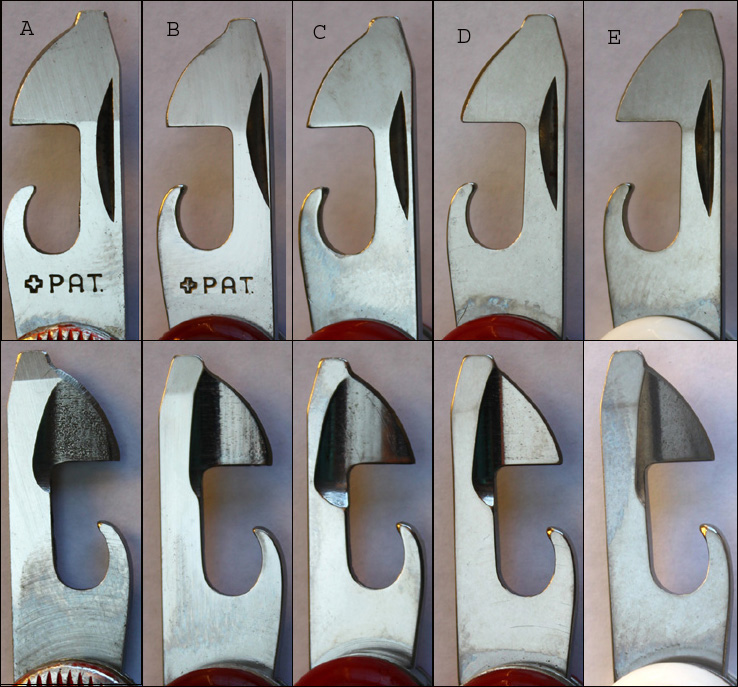 The can is opened by working the tool away from your body.

The original Wenger can-openers were v-shaped, or some say dog-leg style, with a single sharpened edge.
The way to use this older style tool was to pierce the top of the can with the tip, and then tilt the tool until the v notch was riding along the lip of the can; then pressing the SAK downwards levering on the notch and working the sharp edge upwards, cutting the lid, and working around the lip of the can.
There is a small diagram of how to use the tool imprinted on the front side of the tool.
There is a nail-nick on the tool's tip edge.

Wenger changed over to their final style of can-opener around 1975. This newer design was originally a Victorinox patent that they stopped using back in the 1950s, when they switched to their current design.
It comprises a single curved instrument with a sharpened straight edge, resembling a claw of sorts.
The can is opened by working the tool towards your body.