The Reamer is present on many Victorinox models. Historically the tool started out as an Awl, some people still refer to it as such, but Victorinox is currently referring to it as a Reamer, Punch. In 1961 the Awl was redesigned and given a sharpened edge, making it more suitable for use as a Reamer. Typically the tool is located on the backside of the knife and may include a hole through the blade known as a Sewing Eye. The current (2008) 91mm backside version extends 37.7mm, with a sharpened edge of 22.8mm.

The Reamer is typically used for punching holes in lighter material such as Leather or Canvas, and drilling (or reaming) holes into materials like wood. The tool is tapered so as with any Reamer it can be used to enlarge a whole by twisting and scraping the edges of the opening. The sewing eye can be used to push/pull a heavy thread through Canvas, Nylon, or any material the tool can penetrate. The Sewing Eye was first added to the Reamer in 1985.


The Reamer has a hardness rating of RC 52, but it is not known if this applies to all versions if the tool.

There are currently three versions of the tool in production. The basic variation is with, or without, a sewing eye. The third is a version included on the Alox scaled knives.


The Wenger tool is most often closer to a regular Leather Awl without any sharped edges. 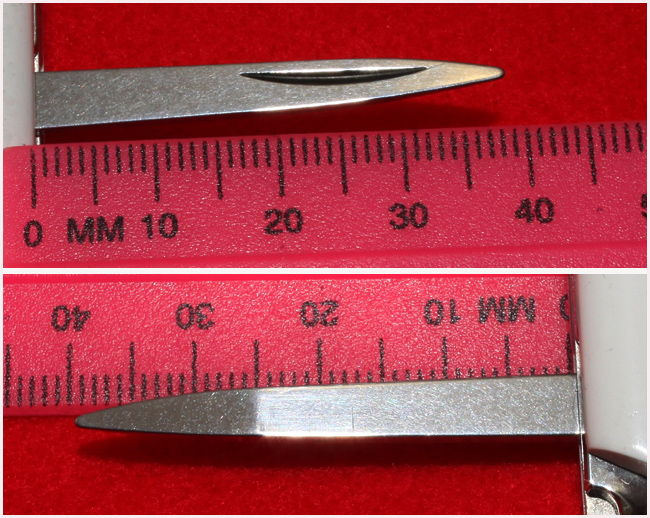 Mike Horn Version. This new version that first appeared on the Wenger Mike Horn Ranger model, is quite unique. This tool has a cylindrical design that has a sharpened edge and works well for drilling/cutting holes in wood and softer materials.