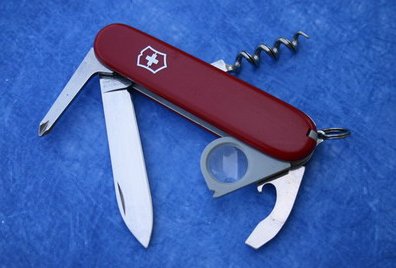 
This model is highly prized by collectors, even though it is not particularly old, it was not produced in large numbers and is fairly rare.

Red 'Plus' Cellidor scales. Also available in black and white.

According to Victorinox, the Scientist was produced between 1986 and 1999*.
The productions dates spanned the time when the corkscrew switched from the fluted to the smooth version (1991). However there was a theory that the Scientists all had fluted corkscrews, however we now know that original Victorinox Scientists exist with both corkscrew types.

The Scientist tool combination is quite popular with collectors, so this model is often created by knife makers and 'modders' by building from parts, or modifying existing models.

* Later editorial note: Re comment in first paragraph regarding rarity - If the Scientist was produced over 13 years one would think that it was not too rare!