The Parachutist is a 111mm liner-locking Victorinox model, also featuring a safety blade.

This model was also available in a one-handed (OH) opening serrated main-blade variation, which was initially named the Rescuer, however, probably to avoid confusion with the Rescue Tool, it became known as the OH Parachutist. Not to be confused with single-layer Parachute Knife. 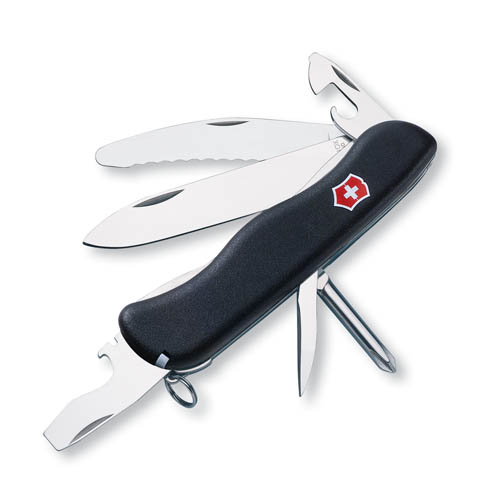 The OH Parachutist replaces the main blade with a partially serrated blade featuring one-handed opening. This model was originally known as the Rescuer.

The OH Parachutist is a close ancestor to the Rescue Tool, and was originally known as the Rescuer. When the Rescue Tool was introduced, the Rescuer appears to have been withdrawn from the marketplace. It reappeared in North America in 2010 as the OH Parachutist at several dealers, and based on pricing and general availability, it is likely the manufacturer was clearing out remaining stock as the Dual Pro model offered similar functionality. It is now (2017) fully retired.