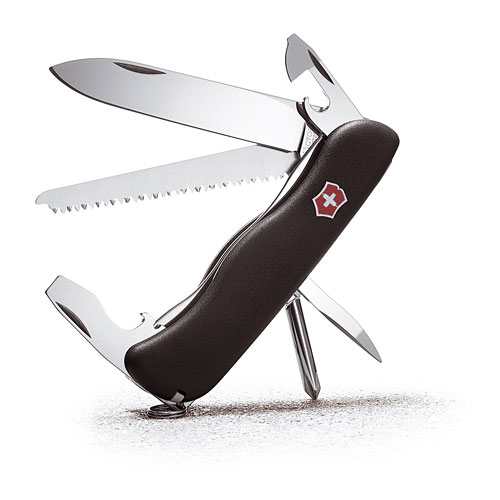 The Victorinox Trailmaster (known as the Trekker in North America - See History), is a very popular three-layer, liner-locking model in the 111mm series, with a with a good mix of tools. This series features a locking main blade, and an extra strong locking screwdriver/cap-lifter.

In 2003 the Victorinox One-Handed Trailmaster/Trekker (OHT) was introduced featuring a one-handed opening blade. The OHT is the civilian version of the original One-Handed German Army Knife (OH GAK) and also the current Swiss Soldier knife.

The Trailmaster/Trekker comes with Nylon scales which are usually black (in common with most original liner-lock models).
Camo, and Camo +ARMEE, scales are also available. There is also a Trailmaster 'Grip' version available with brown dual density scales.
An earlier version, probably marketed as the Trailmaster, had red Nylon scales with a slide-lock.

This model is usually known as the Trailmaster, however that name was already being used in the USA by Cold Steel of California, the TrailMaster Bowie knife being one of their signature products, so Victorinox renamed their knife to be the Trekker  for this market.

In the early 2000s the German military awarded an exclusive contract to Victorinox to manufacture a one-handed opening knife, that contained all the features of the earlier 108mm GAK, as a replacement for that model. (Note: Several manufacturers produced the 108mm GAK). Victorinox selected the Trekker/Trailmaster model as a baseline, and adapted it to a one-handed design for this contract. In 2003 Victorinox offered a civilian version of this model to the general public, where it has proven to be very popular.

Initially the hole in the one-handed opening blade was elliptical, however in 2007 Victorinox redesigned their 111mm OHO models to have: an altered hole which was more circular; a more prominent lock release bar; and also 'VICTORINOX SWISS MADE' was engraved on the blade. The newer release bars can be more uncomfortable when the knife is tightly gripped. (Also see GAK variations photo below and Swiss Army Knights article).

In 2008 this knife was used as the basic design for a new military issue Soldier's Knife for the Swiss Army. This was the first redesign of the Soldier since 1961.
In the same year a plain-edged one-hand-opening blade was offered as a standard option on the Trekker (Model: 54875).