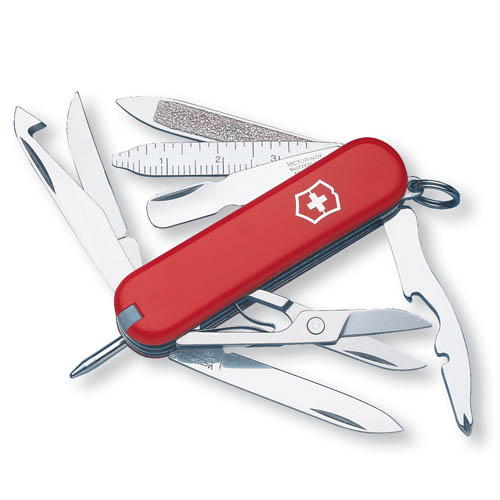 The Victorinox MiniChamp is the largest of the current Victorinox 58mm Swiss Army Knives, yet still suitable for a keychain. It is the little cousin of the 91mm SwissChamp and contains every 'bladed' tool currently available in the 58mm range (2022). Many are unusual and only available on this model. (See 'Tools' below)

The current version is the second configuration of the MiniChamp - (See History and Tools below).

The Midnite MiniChamp (aka MiniChamp Lite) model replaces the tweezers with a small white LED light.

The light is operated by pressing the Victorinox shield, which is a momentary switch in the Midnight version

The Midnite MiniChamp (known as the MiniChamp Lite in some markets) adds a small flashlight to the scales replacing the tweezers. Prior to 2010 or so its LED light was red after that it was white. The Lite version was also available for the four-layer (original) MiniChamp I, which had the light and tweezers as scale tools.

The MiniChamp XL is a retired model that is even larger than the MiniChamp, adding the small divot tool and the older type of nailfile (with the file cut into the metal). However the XL is still classified as a five layer SAK! - See layer definitions here. Robert Elsener of Victorinox reported (June 2008): "The MiniChamp XL was produced between 1999 and 2002, and sold until 2005."