The Signature is a common Victorinox 58mm Swiss Army Knife containing the same main tools as the Classic, but replacing the toothpick with a pen.

The Signature Lite and Signature Laser were later additions to the family, also replacing the tweezers - See the Models section for details. 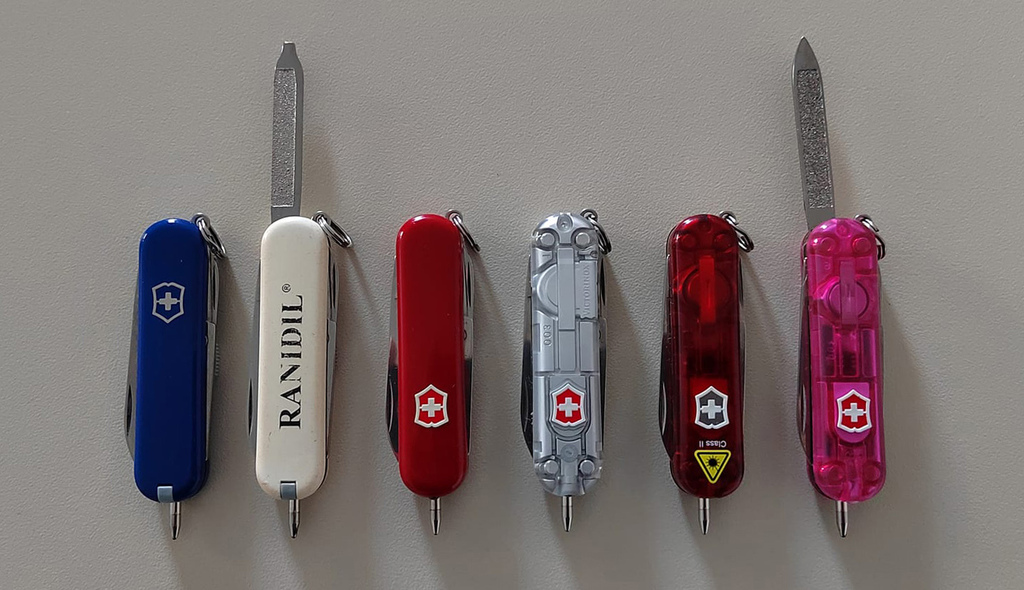 Like the Classic, the Signature comes in a wide variety of colours, although the Signature is not available with scales in any material other than Cellidor (plastic).
The Silver-tech scales are available on the Signature Lite model.

The Signature Family has three major models. The variations being the inclusion, or not, of an LED light or red laser, and also the design of the pen.

This was the original Signature and included a small removable ballpoint pen in the scales.
It is no longer manufactured.

The Signature (II) is an improved design that addressed the poor (due to its size) writing ability of the small removable pen in the original model.
The Signature II has a retractable  pen, which is engaged by pushing down a small grey slide located about half way up the scale, by the scissors. Since the pen remains connected to the knife, the knife body improves the length and usability of the pen. The nail file can also be opened when using the pen to further increase overall length, and allowing it to better rest in the hand.
The Signature II is now referred to as the Signature, since the original model is no longer manufactured.

A later model, the Signature Lite replaces the tweezers in the Signature with a small white LED light.
Note: In the original version the light was red - The white light is significantly brighter than the red light.

The light is activated by pressing and holding the Victorinox shield in the scales, which acts as a momentary switch.
In 2008 Victorinox introduced the Signature Lite with the new clear translucent Silver-tech scales. These scales featured the new white LED light.

Very similar to the Signature Lite, with the LED light being replaced with a red laser. The laser variation was introduced in 2007.
It is no longer manufactured.

In 2020 the Black Onyx version of the Signature Lite was released . This variation has black scales and metal tools treated with a polispectral black coating, the nail-file in the regular model is replaced by a black 58mm ruler, and it is supplied with a black lanyard.
A Spartan and Ranger 55 were also released as part of the Black Onyx set. 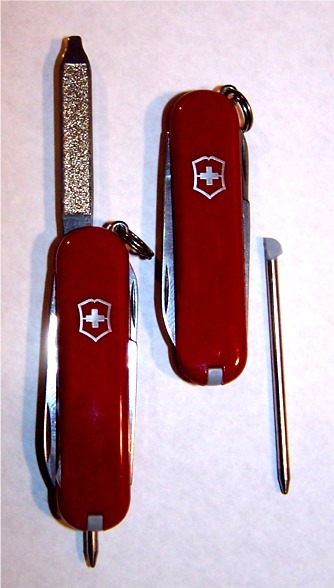 US Model Numbers: (also in brackets above) - All Signatures below