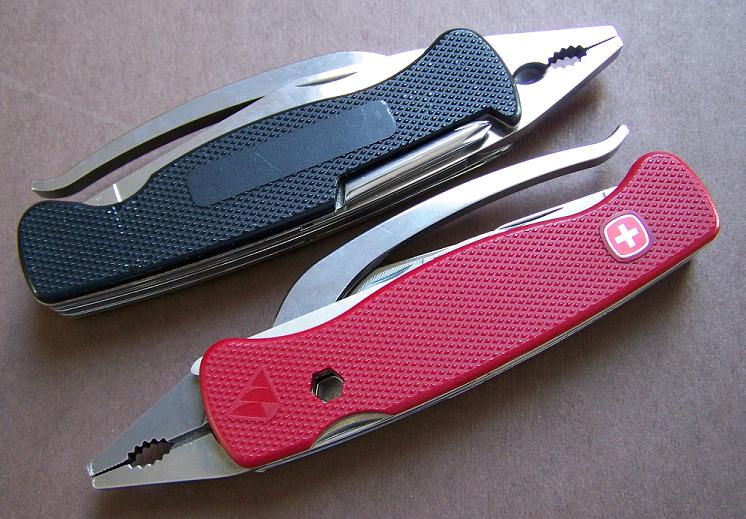 The Wenger SwissGrip (also known as the WengerGrip) is a large plier-type multitool based upon Wenger's 120mm series of knives. It incorporates non-folding pliers with a large plier handle. Also included are two different options for driving 1/4" hex bits. The remaining blades and features of this tool are typical of other 120mm Wenger ''Swiss Army Knives'

The WengerGrip has seven "blades", three of which require the pliers to be opened in order to access. The large clip point knife blade and even larger saw blade are stationed on either side of the plier handle. Opening the plier handle reveals a combination file blade, a medium screwdriver, and a large screwdriver/cap lifter. Both of the screwdrivers employ Wenger's patented spring-pressure safety lock system. On the backspring there is a sewing awl blade and either a corkscrew or a Phillips screwdriver. (see Variations below)


A liner lock is employed on the knife blade, the only blade which locks open.

The most prominent feature of the SwissGrip is the non-folding plier head. Combined with the large plier handle, these short, squared off, blunt nose jaws give a remarkably stout grip on objects. Fine serrations can be found out near the tips, coarse serrations in the middle, and an anvil-type wire cutter in near the pivot.

Included with the SwissGrip is a removable hex bit adapter and a small set of hex bits. The adapter is designed to fit onto the end of the medium screwdriver blade, giving the user a driver with considerable reach. For higher torque applications, the SwissGrip has a hex driver receptacle cut out in the side of one handle.

Handle scales are a diamond-textured plastic material. The Wenger Cross logo is on one side of the tool, with a flat area suitable for engraving on the other.

Originally introduced in 1996. It was last listed on the Wenger website as the WengerGrip 76.