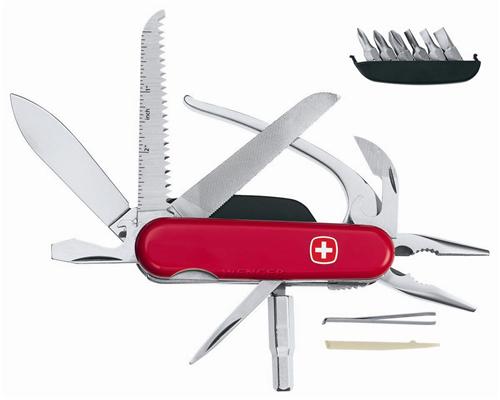 The Wenger PocketGrip (earlier named the MiniGrip) is an 85mm Wenger tool based on a regular Swiss Army Knife, but with a set of non-folding plier jaws protruding from one end. It is available with either square or needle nose pliers.

Also falling outside the standard SAK profile is the pliers handle, which conceals a set of standard ¼" hex driver bits. 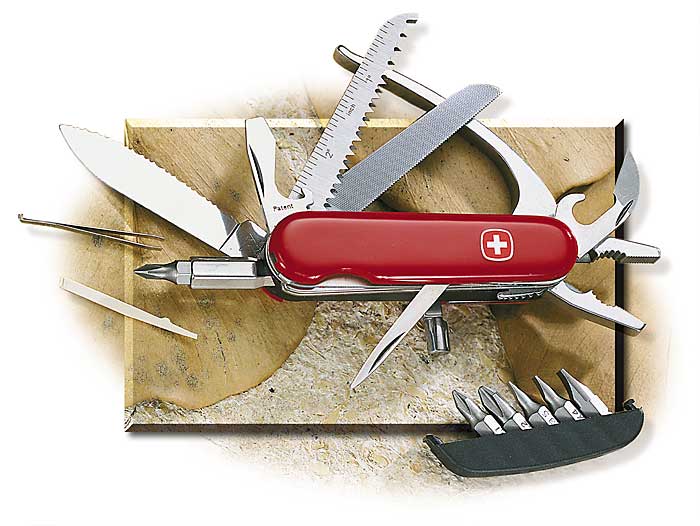 One of the two predominant features of the PocketGrip is its non-folding plier head. Different models feature the pliers with either needle-nose or blunt-nose jaws; both jaw styles have fine serrations out near the tips, coarse serrations in the middle, and an anvil-type wire cutter near the pivot. The jaws are spring loaded, held in the closed position by a lock-switch.
The lock-switch was initially a sliding mechanism, sliding forward to release the lock. Perhaps due to the ease at which the sliding lock switch could be accidentally bumped causing the lock, and thus the spring-loaded pliers, to be released, Wenger changed the design to a pivoting lock switch. The newer pivoting switch proved to be more secure.

The second predominant feature of the PocketGrip is the hex bit-driver that accepts standard ¼ inch hex drive bits. Lifting the plier handle gives access to the plastic bit carrier, which snaps off giving access to the hex bits themselves.
A ¼” hex receptacle/hole is located on the end of the tool opposite the plier head. A screwdriver bit can be inserted directly into this receptacle; however, it would not provide much clearance due to the wide handles or for any inset screws. So, a short removable extension, that is attached to a carrier stub on the back of the knife (next to the awl), is removed and inserted into the hole, then the bit is inserted into the end of the extension, giving about 1⅜" (35mm) of reach. Bits are retained in the extension by means of a magnet, which also secures the extension onto the stub carrier when not in use.
The integrated bit-carrier holds up to six standard bits, providing a lot of flexibility, as the bits can be customised according to user needs. 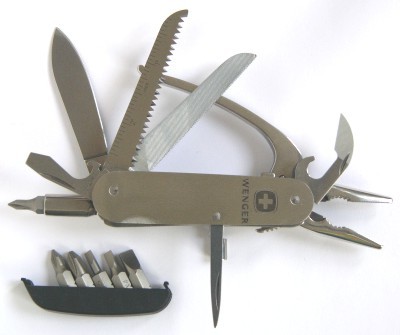 The handle scales are standard red Cellidor, (see Variations below for exceptions). The Wenger Cross logo is only on one side of the tool.

The MiniGrip version has been included with North American packaging dated March 20, 1995. It is not clear if the date represents the actual packaging date, or the date the Limited Lifetime Warranty policy was established (or both).
The red Cellidor PocketGrip was originally introduced in 1998. The needle-nose version (only) was listed on the Wenger website in 2010 as the PocketGrip 577.
The PocketGrip 799 with aluminium scales showed up on the Wenger website in 2006. It only lasted one year before being dropped in 2007.
The PocketGrip shares its frame and several blades with other models in Wenger's 85mm series. Both the needle-nose and the blunt nose plier jaws are also included on the Wenger Giant model. 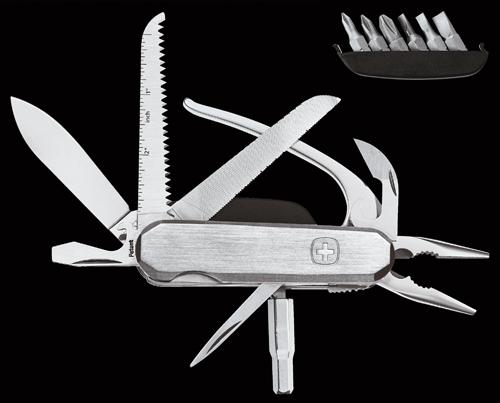