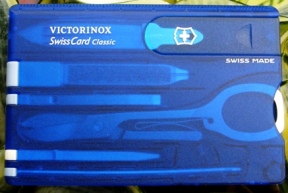 The SwissCard was introduced by Victorinox in 1997 as an ingenious, alternative way to carry some of the typical tools of the Swiss Army Knife. The concept was simple: The tools are stored in a credit card sized package that can be slipped into a wallet, or purse, so they would always be available.
Following the introduction of the original SwissCard a number of other models have been introduced, some of which have been subsequently withdrawn (see Models below).

Like the Victorinox Classic Swiss Army Knife, this 'packaging' also serves as an effective advertising medium, with a large surface area on which logos and (promotional) text can be printed - As an item a person might keep with them, and make use of, this appeals to advertisers.

Originally known simply as the SwissCard, it was renamed to be the SwissCard Classic, to distinguish it from the later models that were introduced.
In this original version there was a rotating door over the scissors, which was removed in the Generation III version.

Tools 1-5 are common to all SwissCards except the Nailcare, which exchanges the blade for a nailfile

A small variation of the Classic : The nailfile is replaced with a money clip.

Another small variation on the Classic : A visor clip, which is used to attach the SwissCard to a car visor, again replaces the nailfile.

The SwissCard Quattro introduced a unique, flat, four-way screwdriver, that replaces the scissors in the Classic Swisscard.

The Quattro Tool * (which still features in the Swisscards Lite and Nailcare)  has the following screwdriver heads:

The SwissCard Lite replaces the nailfile and toothpick from the Classic with a magnifying glass, LED and the Quattro four-headed screwdriver.

The SwissCard Nailcare is a SwissCard targeted at personal care introduced in 2015.
The blade has been replaced with a glass file. The cut out for the new file is smaller than those in the other versions.
The Classic nailfile/screwdriver has been replaced by the Quattro screwdriver and the magnifying glass is also added, giving it a very similar toolset to the SwissCard Lite.

Unlike any of the other materials used by Victorinox for scales, the SwissCard is made from ABS (Acrylnitril-Butadien-Styrol) plastic.

The original SwissCard was patented in 1996 and introduced in 1997 and was followed by several variations in the next few years (see above and below).
Interestingly, the very first SwissCards had different product numbers from the current ones (see above) and were also described as having 7 Features - 10 Functions.
Later, the specification was changed to just '10 Functions'.