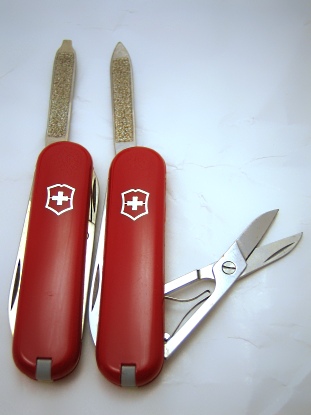 The Victorinox Bijou is a 58mm model that is nearly identical to the popular Classic, offering the same basic tool selection, but without the keyring.
Like the Classic-SD, there was also a Bijou-SD that has a screwdriver tip, rather than a nail cleaner tip on end of the nailfile.
The US importer Swiss Army Brands Inc. originally sold this model as a Commander.

Usually standard red Cellidor scales.
It was also available in blue, black, green, white and yellow Cellidor.
Many other colours and scale types were available see Variations below - Not all are listed.

The Bijou configuration, along with Classic were the first 58mm models introduced in the 1930s. Although they were primarily known by their model numbers at that time (see Identifiers section). Different regions and sellers sometimes even had different names for the models, for instance the Victorinox US Importer SABI (Swiss Army Brands Inc.) originally sold this model as a Commander, and Hoffritz called it the Tinker!
The Bijou name possibly came in the mid 70s when Victorinox brought out a new model numbering convention and started to standardise on decsriptive names.
The SD variation was first introduced in 1987 (tbc).

Both versions are now discontinued. It is not known when either was discontinued, but the original was likely phased out around 1987 when the SD was introduced. While discontinued as an official model, it is still possible that models with this configuration would be available as advertising knives, or in luxury scaled offerings, however they would probably be labelled as variations of the Classic rather than a Bijou.