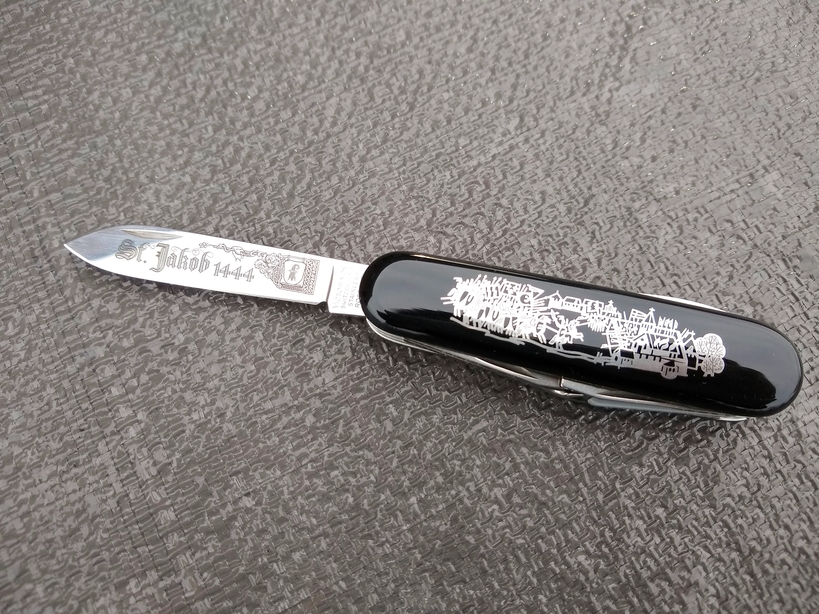 The Victorinox Battle of St. Jakob is a special collector's 91mm Swiss Army Knife released in 1987, with a tool configuration very close to the Passenger model.

This model was the fifth member of the Swiss Battle Series, all of which featured a large intricate silver battle scene inlay on the top scale, and a detailed laser engraving on the main blade.
The series was released to commemorate the battles and alliances that gave birth to the nation of Switzerland.

The main blade is etched with St. Jakob 1444  and the crest of the canton of Basel.

Released in 1987 to commemorate the Battle of St. Jakob in 1444, and to honour the canton of Basel, which contributed a large number of troops to the Swiss forces.

On the right of the scene inlaid on the top scale is an image of the hospital of St. Jakob, on the River Birse, with its steeple and cross, and partially in flames. The Swiss troops are making a last stand against French mercenaries at the hospital. Most of the Swiss are shown behind the walls of the hospital, however a small contingent of Swiss infantryman bearing the banner of Basel are seen outside. Although the French eventually captured the hospital, killing most of the Swiss defenders, their heroic stand served as an everlasting symbol of Swiss bravery and heroism and of their ongoing struggle for independence. This battle is an exemplary and lasting example of 'losing the battle, but wining the war.'

This model was packaged in a black wooden presentation box, which contained a serialised certificate of authenticity, with the serial number matching the liner inscription.
There was also a booklet containing a brief description of Battle of St. Jakob and also a history of Victorinox in German, English, and French, however this was (possibly) only present in the Battle Series Collection presentation case.