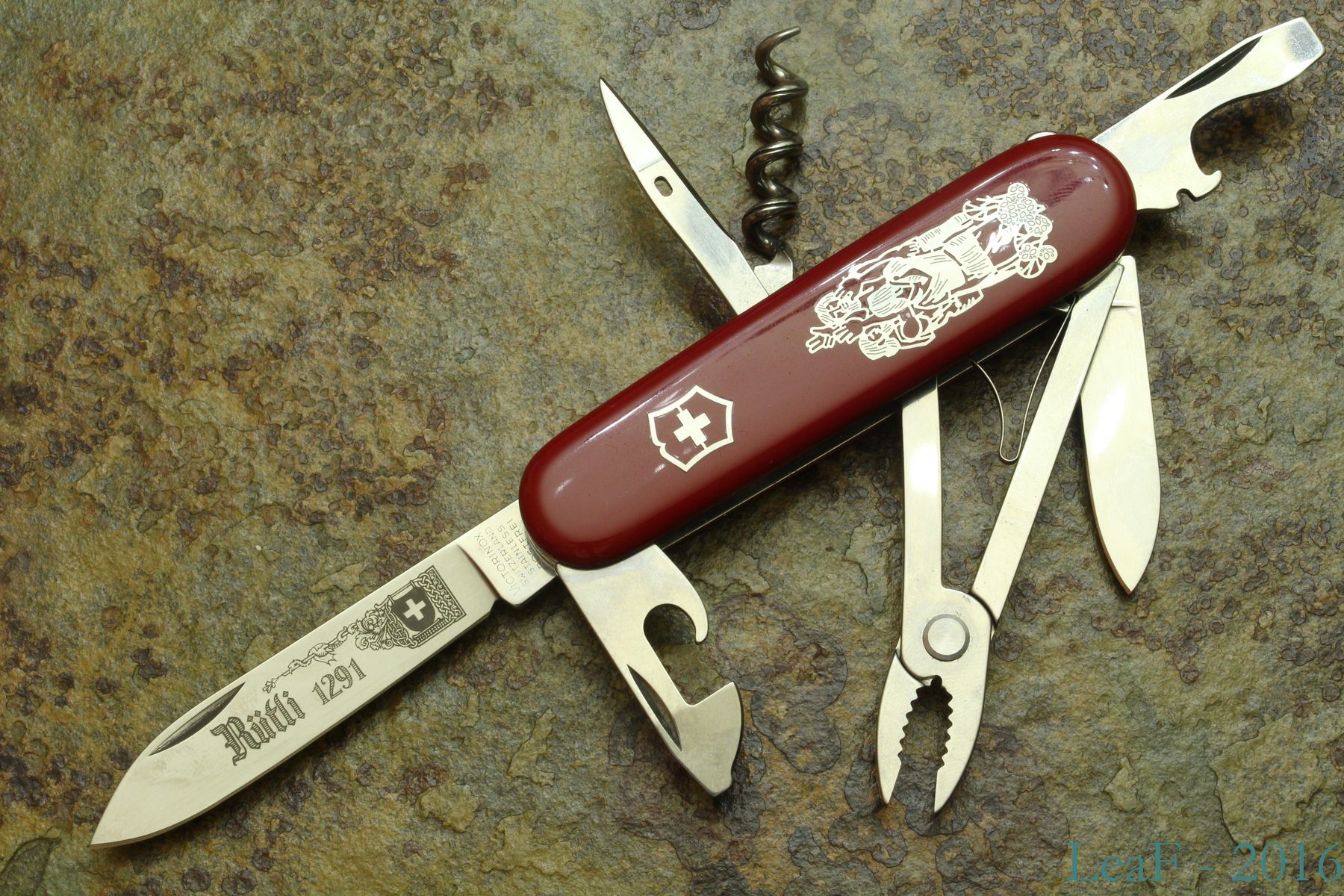 The Victorinox Oath of Rutli is a special collector's 91mm Swiss Army Knife that commemorates the historic Oath of the Swiss Confederacy at Rutli in 1291 (Rutlischwur).

This model was released in 1991 to coincide with the 700th anniversary the founding of the Confederation. It was the seventh, and last, member of the Swiss Battle Series that commemorates the alliances and the battles that gave birth to the nation of Switzerland.

The tool configuration resembles the Mechanic, but with a corkscrew, instead of a Phillips screwdriver, on the back.

The main blade is etched with Rutli 1291 and the crest of the Swiss Confederation.

The tweezers were omitted on all of the Battle Series models to allow the entire scale to be used for the inlay.
The Oath of Rutli also omits the toothpick.

This model is the only member of the Battle Series to have traditional red Cellidor scales.
There is a stainless steel inlay on the top scale representing the signing of the Oath.

Released in 1991 to commemorate the 700th anniversary of Rutlischwur (the Oath of Rutli) in 1291.
The scene on the scale depicts three men, representing the cantons of Schwyz, Uri, and Nidwalden (a half canton of Unterwald), meeting at the meadow of Rutli, near Lake Lucerne, to pledge mutual support and common defence on August 1st, 1291. This meeting later came to be regarded as the founding of Switzerland. The original document, written in Latin, is housed in Schwyz.
The crest of the Swiss Confederation (shown on the large blade), is based on the crest of the Canton of Schwyz, both featuring a white cross on a red background. This design commemorates Schwyz's leading role in calling for the meeting at Rutli, and the founding the Swiss Confederation.
The word Schwyz is the origin of Swiss and Switzerland, and August 1st is celebrated every year in Switzerland as Swiss National Day.

The Victorinox model 1.3623 (no name known) is similar to the Mechanic, but includes a corkscrew instead of the Phillips, so is the regular model closest to this special edition.

The Swiss Battle Series knives were each limited to a production of 9999 pieces and are individually serialised. Each knife is inscribed 'nnnn yyyy 9999 ' on the liner behind the corkscrew: yyyy was the year the knife was issued, nnnn represents the individual number of the particular knife.

The Battle Series models came in wooden presentation boxes, that were usually black, and which contained a serialised certificate of authenticity, with the serial number matching the liner inscription. However this model came in a red box.
There was also a booklet containing a brief description of Oath of Rutli event and also a history of Victorinox in German, English, and French, however this was only present in the Battle Series Collection presentation case.