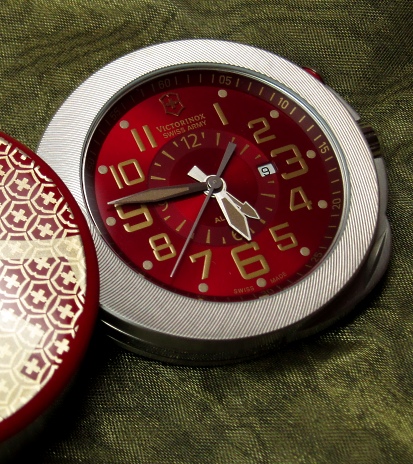 The Travel Alarm 1884 Limited Edition was announced in 2009 as a part of Victorinox's 125th anniversary series. The unique design of this timepiece was influenced by the long history and design of the Swiss Army Knife.


From Victorinox...
From pocket knife to pocket watch: Representing the perfect embodiment of the Original Swiss Army Knife's ingenuity - applied to watchmaking. This Travel Alarm features the same folding system as the famed Swiss Army Knife, complete with spring system and the ubiquitous 'click' sound. Its springs are made of the same stainless steel as the Swiss Army Knife and its case is set in identical red side-panels made of sturdy MABS plastic composite, a specialized material with properties of excellent transparency, high impact strength and good chemical resistance. The side-panels even include the famous toothpick and tweezers found in all Victorinox pocket knives!

The timepiece was supplied with special anniversary box packaging:
A gold mesh with ribbon drawstring transport bag carried a 125th Anniversary red protective box, which had inside a deluxe wooden storage box, and a red felt drawstring watch carry pouch.
Also included was a 125th Anniversary Classic SD in its own anniversary packaging and with serial number (nnnn/1884) on the reverse of the file - matching serial number of timepiece.

Manufactured in late 2009 and early 2010. It was limited to 1884 serialised pieces worldwide, making it an interesting item for the collector. According to Victorinox, production numbers could have been fewer, if the allotted quantity was not purchased or reserved by March 31st, 2010.