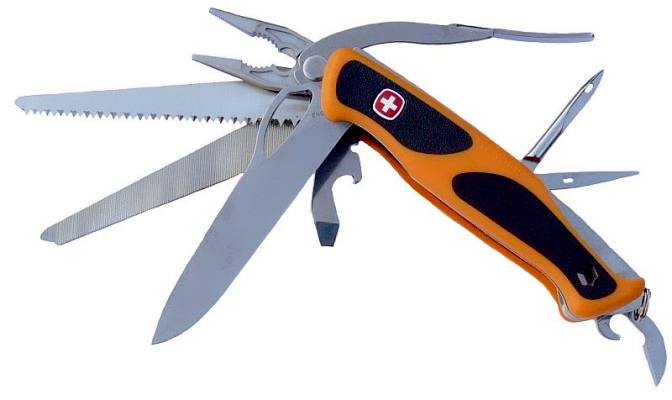 The Wenger RangerGrip 88 (also know as the RangerGrip 88 Rescue) is the largest model in the New Ranger series and has five tool layers. The rubber insert may have a laser etching with the emblem of the Bulgarian Mountain Rescue Service.
It was only available in Eastern Europe.

The scales are orange synthetic with black rubber like inserts for extra grip.
The scales have a ¼" hex shaped hole near the tail end of the knife which forms a standard hex bit-driver built into the frame and scales of the knife.

Versions sold in Bulgaria contain a special etching in the rubber handle insert for the Bulgarian Mountain Rescue Service.

Introduced in 2011.
Developed by Wenger in partnership with Mountain Rescue Service of Bulgaria and sharing some common tools with the Mike Horn Ranger. Reported to be a limited edition in its initial configuration, this might just apply to the MRS Official Version.
The Bulgarian Wenger web site notes that:

This model was developed in cooperation with the Mountain Rescue Service of the Bulgarian Republic, to meet the specific requirements for working in the mountains. A limited collection of 500 pieces and sold only in Bulgaria and two more countries. The knife comes with a canvas case with clip for hanging on the belt or shoulder strap of a backpack.