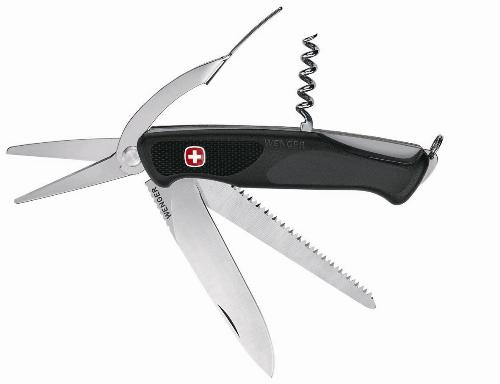 The Wenger Ranger 71 was one of the NewRanger models introduced in 2007, it had three-layers and featured the Wenger exclusive folding scissors.


Discontinued model but available as a Victorinox Delémont.

The Wenger name is laser etched on one face of the blade.
A clever folding scissor tool occupies three spring layers in the centre slot. It consists of a handle, a fixed blade, and a movable blade. Spring action for the scissors is provided by a neat linkage to the backspring.

The Model 71 Gardener is equipped with Evolution scales contoured to fit the hand, either in black Nylon with deep checkering moulded into the thumb area on both sides, or with the later EvoGrip scales. One side carries the Wenger cross logo, with WENGER moulded into the scales. The cross logo is a push button, which, when depressed, releases the liner-lock on the knife blade.

A RangerGrip model with yellow scales was also produced.

This model was introduced in 2007 as part of the New Ranger Series. The unique folding scissors tool was first seen on the Ranger 14 which was introduced a year earlier.