The Wenger Ranger 56 series is a popular three-layer tool configuration. The family includes a number of very similar models that have variations in the style of main blade or scales (handles). These include the Ranger 78, Ranger 156, Ranger 178. These models have a liner locking main blade, that uses a push button on the handle scale to release the lock.

The RangerGrip series was introduced in 2009 and added rubber grip scale options to popular tool configurations, such as the RangerGrip 78, in the 130mm Ranger series.

Discontinued - But available as Victorinox Delémonts.

There were also a number of closely related models that include the corkscrew instead of the Phillips screwdriver. 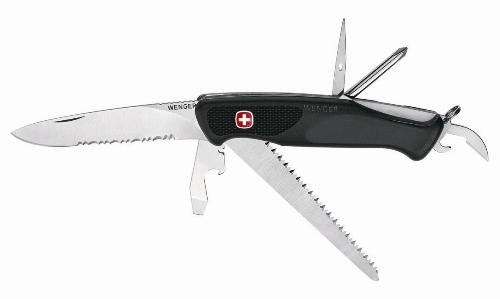 Black nylon scales, contoured in the Evo style to fit the hand. Deep checkering is molded into the thumb area on both sides. One side carries the Wenger cross logo, along with WENGER  moulded into the scales. The cross logo icon is a push button, which when depressed releases the liner lock on the knife blade. They were only available in black, except for the World Scout series which featured purple scales.

The RangerGrip models have rubber inserts in the handle Evo contours, to allow a soft and reliable grip in all weather conditions. These scales are currently available in black, olive drab, red, and yellow. Although most models only feature one or two colour options.

The Ranger 56, and 156 were introduced with the initial 130mm Ranger series in 2007 which was then known as the New Ranger Series. These models were originally considered part of the 120mm series, but are now classified as 130mm which is closer to their nominal frame size once the handles are included. This separates them from the earlier Original Ranger series which are classified as 120mm models.

The models 78 and 178 were introduced in 2008, possibly in response to the popularity of Victorinox Trailmaster.

The RangerGrip series was first released in the spring of 2009, after being shown at the SHOT Show a few months earlier. 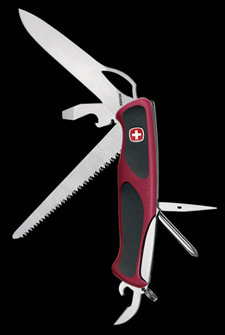