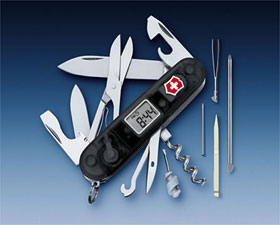 The Victorinox Voyager is a 91mm Swiss Army knife that extends the popular Climber model by adding 'Plus' scales and an electronic clock to the scales.

The Voyager Lite adds a white LED light and inline Phillips screwdriver to the Voyager.

These models were discontinued round about 2008, being replaced by the Travellers.

Name Disambiguation:
The Voyager should not be confused with the older 84mm Alox Voyageur.

Victorinox has had several models featuring time pieces. The Timekeeper was Victorinox's first model to contain a clock, which was an analogue clock mounted on one scale. There was also the Timekeeper Alarm model which had digital timer functions like the Voyager, but a different toolset.

The Voyager was available between approximately 2001 and 2008, although is still available occasionally (2016) probably from old stock.
The Voyager Lite was sometimes packaged in a multicolored model specific branded box.

All models were ultimately replaced by the Traveller models which have all the digital scale functions (horological and barometric) combined together into one unit.

Note: This information to be confirmed

Compared to the Voyager: