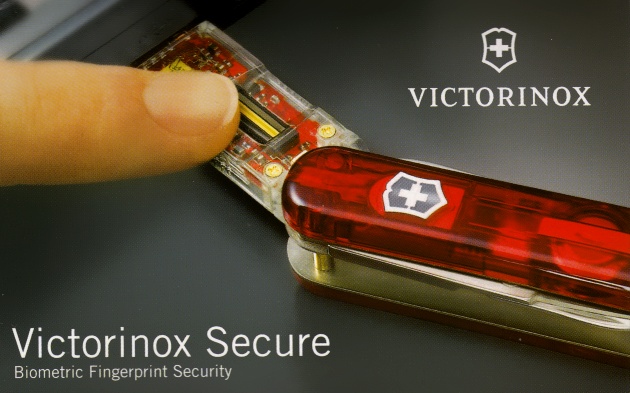 The Victorinox Secure was the company's third generation USB flash-memory technology storage device that added 256-bit AES encryption and biometric identification, with an integrated fingerprint scanner to keep data secure.
This device was a very sophisticated USB tool that utilised proprietary software to access all its functions. It had many features, for instance enabling biometric authentication to be used in place of passwords, when logging into Microsoft Windows. It also allowed the AES hardware to be used to protect data on local hard disks as well as the flash device.

The Secure was available in an everyday version featuring all the standard tools found on the Signature-Lite, or as a 'Flight' version without any 'bladed' tools. As with most USB flash-drive Victorinox models, the Secure is really a series of models with different storage capacities. 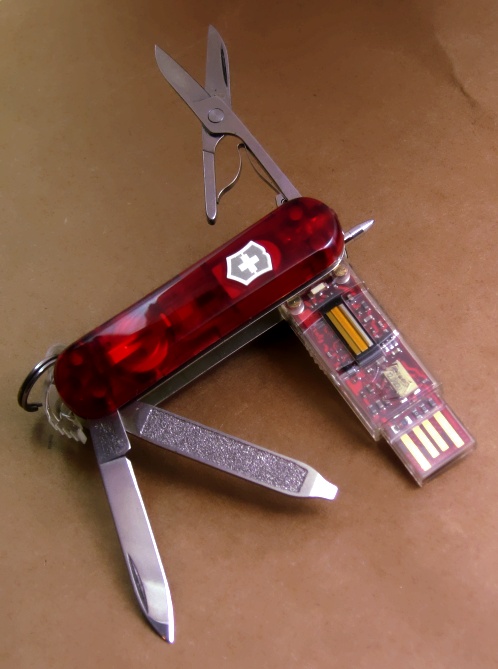 * - Not on the Flight version

Announced many times and after several delays, this model was finally released in Switzerland in the first quarter of 2010, and in North America in the second quarter.

Marketing included a contest for 100K dollars, if a hacker could break the security. The contest however, was very controlled and not really representative of something that might be seen at DefCon. While AES-256 is known to be secure, providing the full standard is implemented, the security of the biometric devices and other system factors was completely unknown. Several biometric authentication devices have been spoofed and DMCA and national security issues mean there was a possibility that device security could be breached. Chances are that a neighbour, another office worker, or the cab driver, who might get their hands on the device, would not find it too easy to access the storage, however true hackers might! No mention of a 'Call-Home' feature, which would have been nice!

This model and its associated software was withdrawn by Victorinox not very long after it became available - see section below.

The message below was reported to be sent by Victorinox to their customers in 2012. It appears that they are withdrawing from software products such as are found in the Secure. Note: They are still (2020) making USB devices.

Victorinox manufactures exceptional products since 1884. We are known worldwide for our quality products and excellent services.
The market for information products develops and grows dynamically. As a company we are facing major challenges with new platforms and with the different levels of software developments. It is our mission and our inner obligation to our customers to deliver the best service in this segment as well as good products and related software. The rapid development coupled with our standards of quality have prompted us to reconsider our offer. As an economic company, we are required to provide the necessary expenditures in reasonable proportion to the possible yield. For this reason we have decided to offer only pure knife products with appropriate hardware. For all software, we will refer to a third party. Further more, we will stop providing any future software updates and as of September 2012 we will cease all services in this segment. To this end we will discontinue our services to our web page http://secure.victorinox.com. Warning! The VeriSign software certificate for the secure.exe is only valid till 15th September 2012. We therefore strongly recommend that you create a data backup immediately.

Victorinox will continue to bring USB storage devices onto the market. These products are offered at market prices, with correspondingly good performance and a clear line. Existing products will be adapted and the savings gained by not using the special software, will enable us to provide a full service to our customers.

Editors Note: This information has not been confirmed.
Source: engadget: https://www.engadget.com/2012/08/21/victorinox-stops-software-updates-secure-usb-drives/