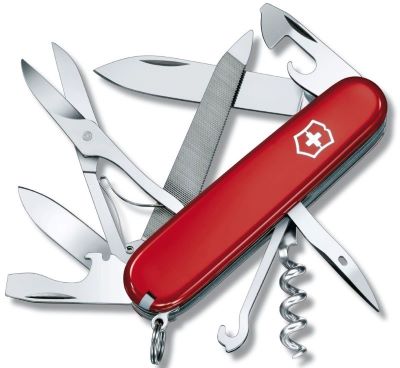 The Victorinox Mountaineer is a four layer 91mm model, and is one of the few models to include the metal saw/file without also including the wood saw.

The Mountaineer Lite adds a white LED light and inline Phillips screwdriver to the Mountaineer.
The Lite model is discontinued.

The Mountaineer was not very popular in North America, as it seems the metal-file/saw is not a popular tool in the smaller knives.

The Mountaineer Lite was not released in North America, and is not too common elsewhere. Originally Victorinox catalog information, and image, indicated that this model included the fine screwdriver on the back, but it appears this information was in error as several Mountaineers purchased between 2008 and 2012 contain the wood chisel on the back, some sites in Switzerland also reported this model as containing the Chisel.