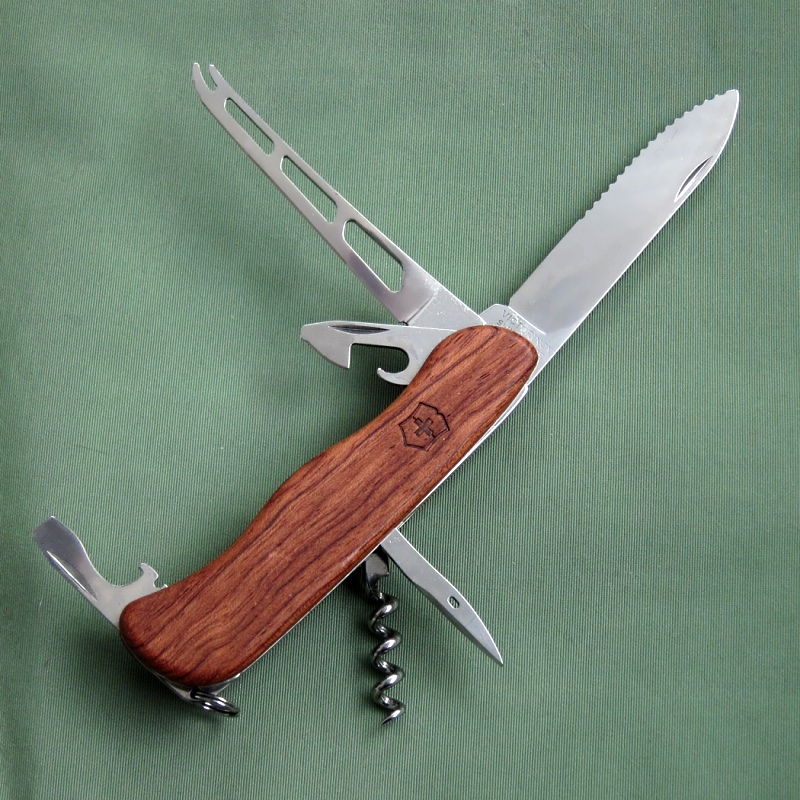 The Victorinox Hardwood Cheese Knife is a three-layer 111mm liner-locking model, the second model/tool configuration to include the Cheese blade. It adds the 'opener-layer' to the original Cheese Knife, and features Bubinga wooden scales.

This model uses a slightly different liner-locking design to the other three-layer 111mm liner-lock models: The main-blade features a liner-lock, but located in an outside layer rather than the centre layer position established with the Trailmaster/Trekker. This configuration means the main-blade has a liner-lock, but the cap-lifter/screwdriver is non-locking. It includes the smaller/thinner (2mm wide) 'slide-lock' openers and the reamer with the sewing-eye, making this model an interesting hybrid of the side and liner lock 111mm designs.

Bubinga Hardwood with the Victorinox shield logo laser-engraved in the top scale.

In 2012 this special-edition wooden scaled Cheese-Knife featuring Bubinga hardwood scales, and a liner-locking main-blade was produced for the Victorinox flag-ship store in London, England. It was only available through the London store. Initial production was only 500 knives.

In December 2013 a US Edition was also introduced known as the Hardwood Cheese Knife. The model number indicates it was a limited or special-edition, no information on production quantities was available.