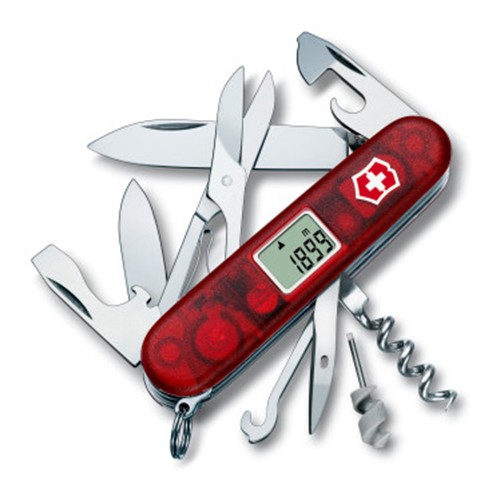 The Traveller model is a 91mm Swiss Army Knife from Victorinox, introduced in 2008, that contains the same same layer- (bladed) tools as the Climber, extended with the several electronic horological and barometric features in a digital unit in the scales. See Scale Tools and History below.

The Traveller Lite adds a white LED light and inline-Phillips screwdriver to the Traveller.

Withdrawn models as of 2022

Name Disambiguation:
The original  Traveller (1.3702/54591) was a an earlier model, that had the same main toolset as the Climber, before the multipurpose-hook was added, but without the keyring (and no electronic scale tools).
There is another model called the Traveller-Set, which, rather confusingly, is a variation of the Huntsman, which comes in a pouch and with other accessories.

Note: The Expedition Lite model (which is an upgrade to this digital Traveller model) also comes in a pouch with similar accessories to the Traveller-Set!

All the electronic features are controlled and accessed via a single button (the Victorinox shield) with a short click of the button scrolling round the functions, and holding down the button, whilst on a function, activating the change/set capabilities for that function. This takes a little getting used to!
The Traveller is supplied with a short instruction leaflet (XI.13/X.90204), however full and detailed instructions are available here.
The digital display has a back-light which is activated by pressing the logo button for about two seconds, which allows the display to be checked in the dark. The back light stays lit for about three seconds. Note: This feature is not explained in the short instruction leaflet!

Translucent red Nylon scales: One containing the digital display and a red and white Victorinox logo, that serves as a switch to control the display; The bottom scale is the new 'digital' version that contains four tools: the two regular scale tools, plus the pen and the pin.

Victorinox had produced a few models with timer/clock capabilities such as the TimeKeeper, Voyager and TimeKeeper Alarm, there was also the Altimeter with meteorological functions. The timer and clock functions of the Voyager were combined with the altimeter and thermometer functions from the Altimeter models to create the new digital unit in the Traveller. Barometer and stopwatch functions were also added to the unit to give an impressive seven functions overall. The model was announced in April 2006.

The original Traveller model was a predecessor to the current Climber, but did not contain the keyring or more recent hook.