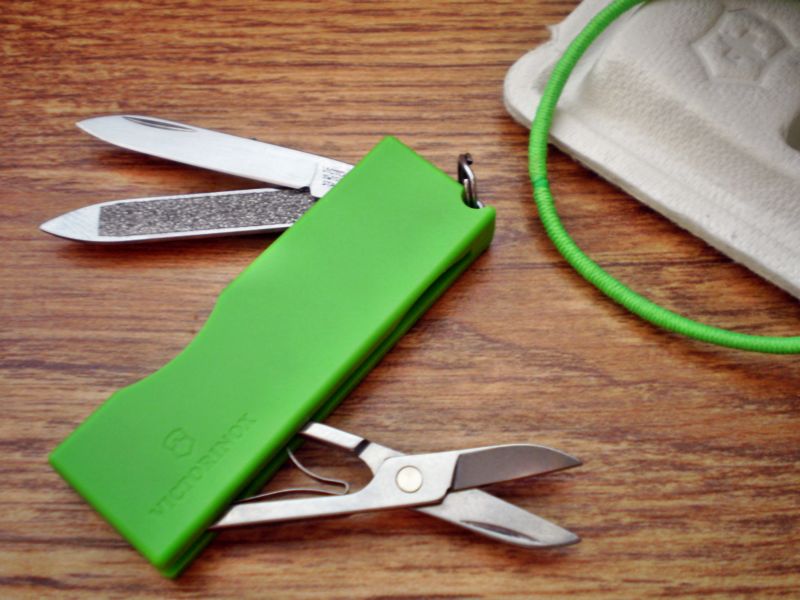 In 2011 Victorinox introduced the Tomo - A completely new look for the traditional Classic created by Japanese designer Kazuma Yamaguchi's ABITAX Design Studio in Tokyo.
It contains the same toolset as the Classic, but with a radically different scale design.

The word 'Tomo' means friend and companion in Japanese, but has both older and contemporary richer interpretations.

The model appears to be discontinued as of 2017.

Unusually, for a Victorinox keychain 58mm knife, no toothpick or tweezers

The Tomo had very unique and unusual, for Victorinox, square scales that came in several attractive colours. It was available in white, red, pink, yellow and blue scales, and extended the palette of Victorinox with brand new Green Apple and Mint colours.

The Tomo was first introduced in 2011. It appears to be very different from the Classic, due to the scales, - even the size - however, the frame and tools inside the Tomo are exactly the same as the Classic.
New eco-friendly 'egg-carton' packaging added to the new design elements provided by Kazuma. For a little fun and style, the packaging uses an elastic closure system with a color-matched elastic for each knife color, and a small window to see the colour of the scales inside.
A new white leather pouch was introduced specifically for the Tomo, which was also available separately.
The design initially met some skepticism from Victorinox knife aficionados, however a small keychain knife such as the Tomo is carried by people from all walks of life. Some feel the design is aimed more at the female gender, no doubt in part due to the available colors.

The Tomo appears to be discontinued as of 2017.