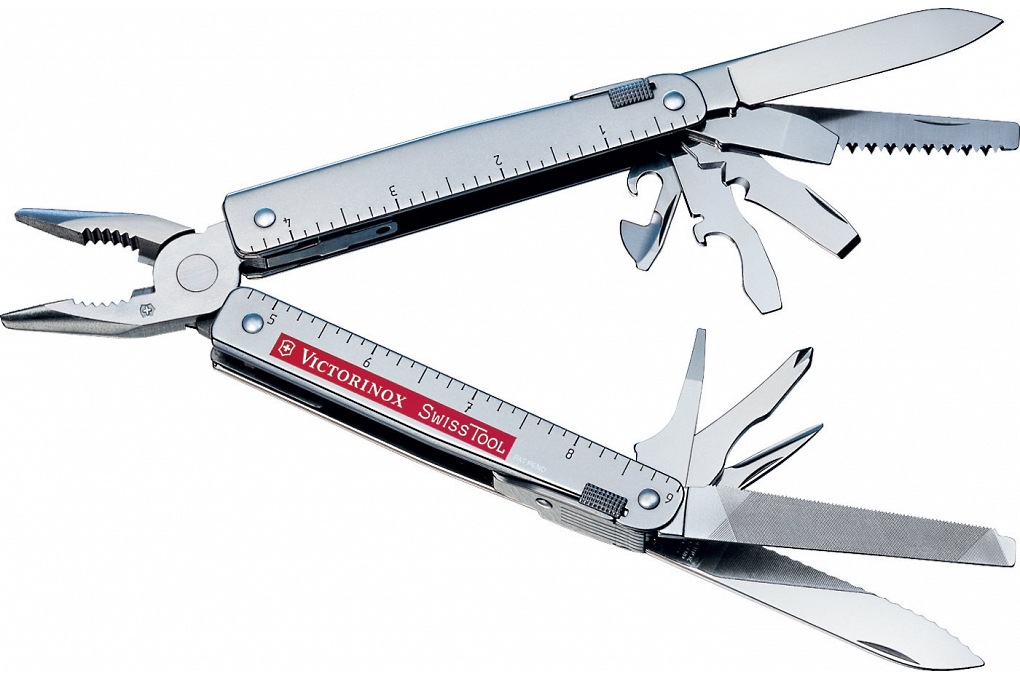 The Victorinox SwissTool was the famous Swiss Knife manufacturer's first foray into the folding plier-based multitool market and was brought out in 1997.

It has since set the standard for quality of design and manufacturing.

The SwissTool employs outside-opening blades, allowing quick access without first opening the pliers. This arrangement also makes for a more comfortable feel in the hand when using the pliers due to the smoother edges of the handles.

The SwissTool has a total of eleven 'blades' or tools, many of which are multi-function.
All tools lock open securely, the lock release is accomplished by means of sliding knurled tabs, accessible by either hand.
Each of the tools is tensioned with its own individual back-spring, a set of precision steel fingers that also prevents unwanted blade clumping.
All Swisstool tools are outside-opening - ie They fold out when the handles are closed.

These tools are common to all  Swisstool models:

Outer Tools:
These are the full length tools against the handles of the multitool.

An additional  two outer tools are added by each model (-see Models section below).

Inner Tools:
These are the shorter tools between the outer tools

Notes:
The location of a tool in the handles, in a particular model, and over time, varies - eg. see pictures on this page. However the set of tools in a specific model is always the same.

The basis for the SwissTool is a set of needle-nose pliers. The plier jaws have fine serrations out near the tips, coarse serrations in the center, and wire cutters in near the pivot.

The models below add the outer  tools indicated to the standard tools listed above.
The names Swisstool I, II and III   have also been used at sometime by Victorinox.

This is the model pictured in the top panel, but with its original drop-point  serrated blade
- The sheepsfoot blade was introduced in 2013? (tbc)

This model was targeted at first response personnel.
It is understood that the 'R' in the tool name stands for 'Rescue'  and the 'S' for 'Security'  - 'S ' could equally be 'Serrated', or 'Seatbelt ' , or also 'Scissors' !!

This model appears to be withdrawn (2017)

This model has the same toolset as the Original Model.

It features Victorinox's blackened, burnished steel, which has a deep lustre and, according to Victorinox, provides for better protection against corrosion. It also features an ordnance 'cap crimper' in the pliers.

The SwissTool has been available with various combinations of the following stand-alone tools: a corkscrew; a jeweler's (micro) screwdriver; a set of six 1/4" hex bits in a plastic holder (red, but black bit holders are known to exist as well); and either, an L-shaped wrench, or, a small ratchet.
The bits supplied in the Plus holder are: Phillips 0, Phillips 3, Torx 10, Torx 15, Hex 3, Hex 4
The corkscrew attaches to the Swisstool by means of a small contoured hole in the plier bracket.

Initially these additional tools were available via the following model numbers:

.... which caused some confusion - As users thought that these were different models of the Swisstool itself, whereas in actuality, they just represented the stand-alone tools being added to an existing model.

So this convention was changed, and the current Plus packages are now known using the nomenclature below - both are upgrades to the Swisstool X.

SwissTool handles are highly polished stainless steel. One side has a metric scale up to 23mm, the other side has an inch scale up to 9 inches. The Victorinox logo and the full word are stamped onto one side, while a red Victorinox SwissTool banner is screen printed on the other.

Victorinox took over the American multitool manufacturer Bear MCG to acquire patents and expertise in the plier based multitool market and products. After a couple of years of R&D the SwissTool was announced in 1997. It was not fully into production and generally available until a year later.

Always with an eye towards improvement, Victorinox strengthened the plier jaws and changed the pivot from right-hand to left-hand in 2002. Also changed was the hole in the plier bracket, which was contoured into a receptacle for the removable corkscrew at about the same time.

Apart from the plier head changes, the Swisstool has had almost no changes since it was originally introduced.

US Model Numbers: (also in brackets above)