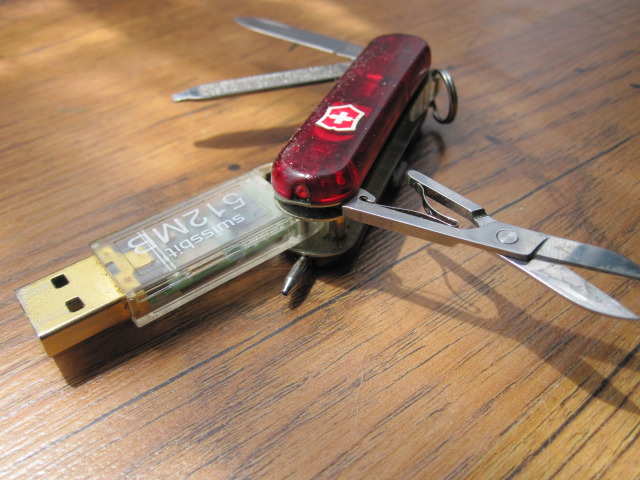 The Victorinox SwissMemory series integrated a flash-drive (aka thumb-drive) computer memory device into the ubiquitous Victorinox 58mm Swiss Army Knife.
The SwissMemory is essentially a Victorinox Signature model mated with a USB flash drive.
There are a number of different SwissMemory models making it more of a series, than a single model. The differences include bladed tools, scale tools and memory capacity. 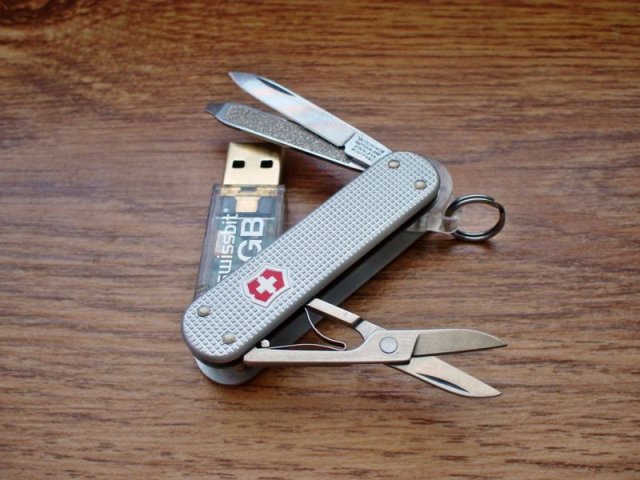 Available with Cellidor and Alox scales, translucent red (ruby), and translucent blue (sapphire) in Cellidor; silver for the Alox handles.
The Alox scaled SwissMemory does not have the LED or retractable pen.

This model removes all the bladed tools retaining only the thumb drive, which makes this model acceptable to carry on board an aeroplane.
There is an Alox version of the SwissMemory Flight, with no scale tools.

This model replaces the red LED light with a small red laser pointer in the Cellidor scales. All other things remain the same.

Combining the two above variations, this model removes the blades to make it airline friendly and replaces the LED light with a laser pointer.

The size of the memory in the removable thumb drive varies according to the age of the Swiss Memory model. Early units had as small as 64 Megabytes while the later models had as much as two Gigabytes. Memory capacity is independent of the other variations, ie. any of the model variations may have a different memory capacity.
Sizes available as of April 2007 were 256MB, 512MB, 1GB, 2GB.

This family was replaced by the Victorinox Flash family and then by later models. The current Victorinox 58mm models containing USB devices are the '...@Work' series, such as the Victorinox@Work