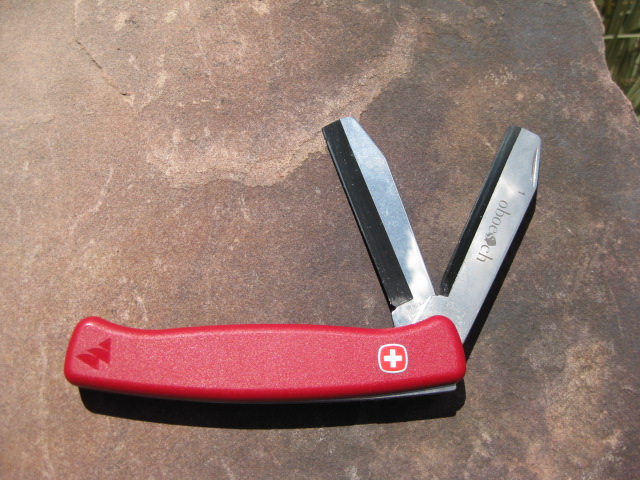 The Swiss-Star Oboe Knife - Swiss-Star Oboemesser - is a specialised Reed Knife designed by Oboes.ch in collaboration with Wenger, and Klötzli of Switzerland. It features two special blades, designed by oboists, specifically for reed maintenance.

This knife was distributed exclusively through Oboes.ch, and whilst it belongs to the Wenger 120/130mm Series, it is unlike any other in the series, due to its specialised purpose.

Both blades are non-locking.
The blades are thick and made from 440-C-special steel, hardened to 59-60HRC (which is not typical Wenger knife steel). They are beveled to a fine edge, with a different bevel angle on each blade.
The blades are used for scraping the reeds  found in woodwind instruments. One blade is used for general work, whilst the other is designed for finer work near the tip of the reed.
* A reed is a thin strip of material (usually cane) that is part of the mouthpiece of a woodwind instrument.

Available with 'new' and 'old' Ranger scales/frames in red or black nylon.

The Swiss-Star oboe knife was developed in a collaboration between oboes.ch, Wenger, and Klötzli* of Bern. The knife is exclusive to Oboes.ch  which makes it available through its resellers.
The company Oboes.ch was founded in 1990 by Renato Bizzotto, an oboist with many years orchestral experience (Zurich Symphony Orchestra, Aargau Symphony Orchestra, Shanghai Radio Orchestra, Beijing Symphony Orchestra, Zurich Opera Orchestra ...)

* Klötzli is a Swisss knife making company and family based in Burgdorf city near Berne - which also has close associations with Victorinox
See Related links: Oboes.ch - Swiss Star and Klötzli History

Due to the very specialised nature of this tool, there are no related models.