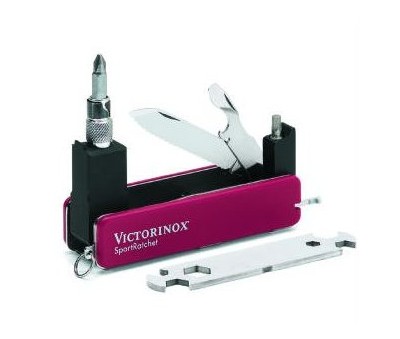 The SportRatchet is a Victorinox tool containing a ratchet driver for interchangeable bits.
Its shape is unlike any other Victorinox model.
It was not successful, most likely due to the large size and limited tool set.

The tool is provided with two double headed bits: hex and Phillips, both stored internally

The SportRatchet draws back to its Swiss Army Knife roots with:

The ratchet driver is a relatively large, blocky tool. A switch on the ratchet allows it to be turned only clockwise, only counter-clockwise, or not at all. This enables a user to quickly tighten or loosen screws. The ratchet tool locks into place with a liner-lock.
The wrench slides into a slot along the bottom of the tool. The wrench has three different sized hexagonal holes on each end and can be used on a range of metric and imperial nuts.

The SportRatchet comes with Nylon red scales.
VICTORINOX  and SportRatchet  (in smaller letters) are printed on the side of the tool, and no traditional Victorinox shield!

The SportRatchet was only manufactured for a brief period in the late 1990s. According to Victorinox it was released around year 2000, 25,000  were produced, and it was only sold in the North American market. Production was stopped after about a year due to disappointing sales, and it was considered a flop.

Due to its unique 110mm frame the SportsRatchet is unlike any other tool produced by Victorinox, so there are no related models.