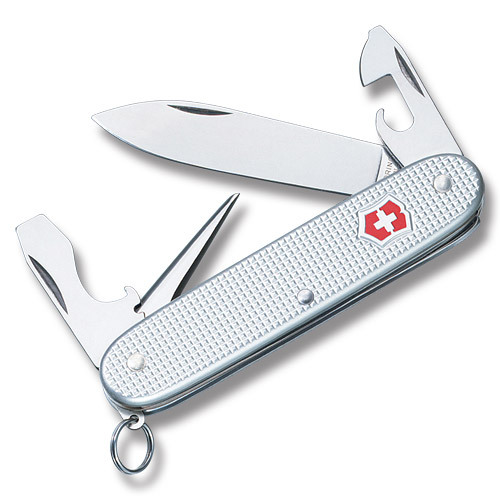 The Victorinox Pioneer is essentially the civilian version of the Victorinox 93mm Soldier's Knife and features the same tools and construction. It is the Swiss Army Knife on which Victorinox based the design of the alox 'Soldier ' in 1961.

The Pioneer, however, has a few differences from the Soldier:
- It almost always includes the Keyring
- The logo on the scales is the Victorinox, not the Swiss, shield
- It does not have the year of production stamped on the tang of the main blade
- On the opposite scale to the logo (bottom scale), it has a small flat area available for engraving.

Silver ribbed Alox scales are standard, but many other colours have been available/produced at different times.

The original Pioneer had red Alox scales with the plain silver cross emblem (Swiss Cross) - not the Victorinox shield - on the top scale until around 1999 (see image below). From 1957 until about 1984, the liners and keyring spacer/attachment were made from brass. Starting from 1984, Victorinox changed the liners to nickel silver, although production samples with brass liners can be found after this date. The original version of the Pioneer also did not have a panel on the bottom scale. The first version of the Pioneer features the original triangular awl. The bottom and inner surfaces are flat, the outer face is rounded to conform to the scales. The inner edges are not sharpened.

The Pioneer name was used to identify a series of models (see Related). The early version was also known as the Pioneer Sturdy Boy. The Sturdy Boy name was also used to refer to the Pioneer series, until the mid 201xs, as they where known to be very robust models.

The Pioneer was used as the basis for the new design of the Swiss Soldier's Knife in 1961.

Reported by Victorinox December 2010:
The Pioneer Range was introduced for the first time to the market in 1957. This range led to the development of the Soldier Knife (Model 1961) with red aluminium handles. It was delivered for the first time to the Swiss Army in June 1962. There was no shipment to the Swiss Army by Victorinox in 1960 and 1961, however Wenger produced the former model during these two years.

Several special runs of Alox scaled models in very limited quantity (typically 50 or 100 pieces), started being produced in 2010 for the collectors market, each knife being individually numbered n/50 with a stamp on the main blade. Many of these special models were Pioneers. These models have the standard silver outlined shield and were offered for sale online though some US dealers and agents, as well as through various other channels, that extended the distribution internationally. In 2011 more special runs commenced with the release of three new Pioneer variations in January. Each of these were limited to fifty pieces, and each of them is individually stamped on the main-blade with its unique number in the series. See Variations below for details on some of these special issues.

In 2015 Victorinox stated that they would reduce the number of limited edition (LE) Alox Swiss Army Knives, and just issue one LE per year. These editions are not limited in number - only by year! Each year a Pioneer, a Cadet and also a Classic SD are released in a matching colours. See Variations section for more details. (Note: Individual dealers still appear to be creating dealer specific colour ranges - eg for the Pioneer X).