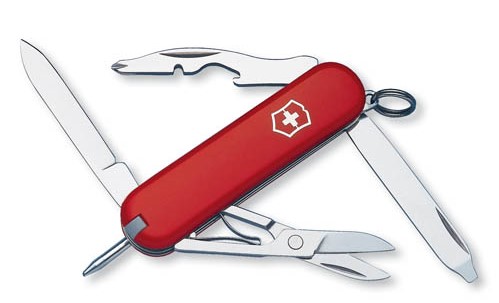 The Manager is a common 58mm Victorinox Swiss Army Knife that has the same main toolset as the Rambler but with a pressurized ballpoint pen replacing the toothpick in the scales.

The Midnite Manager replaces the tweezers in the Manager with a small LED light.

The Midnite Manager@Work adds a slim USB drive to the body of the knife.

Name Disambiguation: For a brief period of time probably in the late 1990's, possibly only in some markets and prior to this Manager configuration, the Vagabond tool configuration was known as the Manager!

The light is activated by pressing and holding the Victorinox shield, which acts as a switch.
A small battery is inserted in the handles to provide the power source for the light.

Note: Victorinox suggests opening the nail-file when using the pen, to extend the overall length and make writing more comfortable.

A flat, instead of Phillips, screwdriver variation on the combi tool was also available for the Manager and Midnite Manager models. This option is now withdrawn. These models don't have their own names - Let's name them Manager II / Midnite Manager II accordingly?