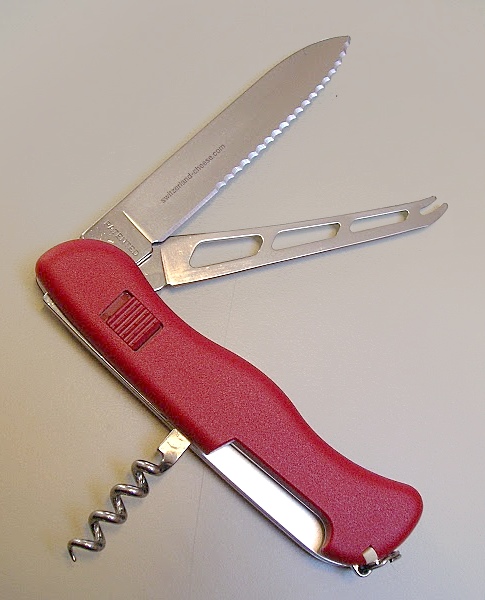 This model introduced a new tool to the Swiss Army Knife: the Cheese Blade, it came with custom scales and the main blade had SCM marketing information etched on both sides.

Initially this model was only available via promotions from SCM, but later a regular model with standard features became generally available. The cheese blade was also introduced in a variation of this knife and in an additional special edition - See Scales, History, Models and Variations below.

This model was originally manufactured by Victorinox using their 111mm frame with a slide-locking main blade. In 2017, as part of Victorinox's re-structuring of their 111mm range, the standard Cheese Knife was converted to be liner-locking.

The main blade on the SCM version had etching on both sides: The reverse side advertising switzerland-cheese.com; the obverse had the model name etched in four languages. Prior to 2017 the main blade was slide-locking.

The scales on the original promotional version were unique to this model.
They were red Nylon with a large white Swiss cross logo in the centre.
The shade of red was brighter than the regular models, the lock release button was red.

The generally available model had regular slide-lock scales, with the normal shield and grey button.
The liner-lock version has no release button in the scales.

See Models and Variations below for timelines.

The Victorinox Käsemesser was first introduced in 2010 as a part of a marketing campaign by Switzerland Cheese Marketing (SCM) AG. Its design and introduction was a collaboration between SCM AG and Victorinox. This was the first new slide-lock based model introduced for several years - as new models tended to be liner-locking at that time.

The initial promotional campaign involved customers obtaining the knife through the mail for 20 CHF together with five Swiss cheese proof-of-purchase seals. The knife was delivered with some unique custom packaging (see section below), also a booklet on Swiss cheese was included. SCM had sole marketing rights for the knife for three years.

It was reported in February 2011 that SCM had already sold the complete initial run of 30,000 knives, and was in the process of procuring another shipment. Victorinox stated that this knife may be available from their Victorinox Flagship Stores, however, due to the exclusive marketing agreement with SCM, would not be generally available.

SCM Backgroud  (Machine Translation)
Switzerland Cheese Marketing (SCM) AG is a non-profit organization that offers its services in the area of Marketing Communications to the market participants in the Swiss cheese industry. It operates a synergetic, effective and efficient consumer marketing for Swiss cheese. Headquartered in Bern, SCM operates in Switzerland and in the key export markets of Italy, France, Germany, Spain and the Benelux countries where it has offices and specialist teams. By combining the strengths of all industry players and, thanks to thorough market knowledge and local presence, the team experienced a significant positive contribution to the promotion of Swiss cheese. SCM is involved as a neutral and information dissemination site for the entire cheese industry.

Switzerland Cheese Marketing starts 2010 with a new advertising campaign for Swiss cheese in Switzerland (Switzerland). Target: Consumers will increasingly look for the origin of Switzerland when they are at the cheese counter or in front of the refrigerated section and shirts. Generic advertising of Swiss cheese has to be a part of the variety of advertising and must stand out clearly on the other hand, of course, do not favor any single brand, the responsible agency New LGK writes in a press release.

This creates only an idea, an image, a symbol, a story that works on behalf of all cheeses. A good reason to reinvent the last Swiss cheese knife. Because it is the Swiss Army Knife with over a hundred different blades. But so far it had just no cheese blade. That will change soon. In September, comes as part of the new advertising campaign, the Swiss cheese knife with a special blade on the market. In all new TV commercials, the new Swiss cheese knife will be shown and discussed here about the Swiss cheese, its qualities, its production, its traditions, its naturalness. More info: http://www.persoenlich.com/news/show_news.cfm?newsid=88812 This entry was edited on 03:06:10 at 13:30 clock.