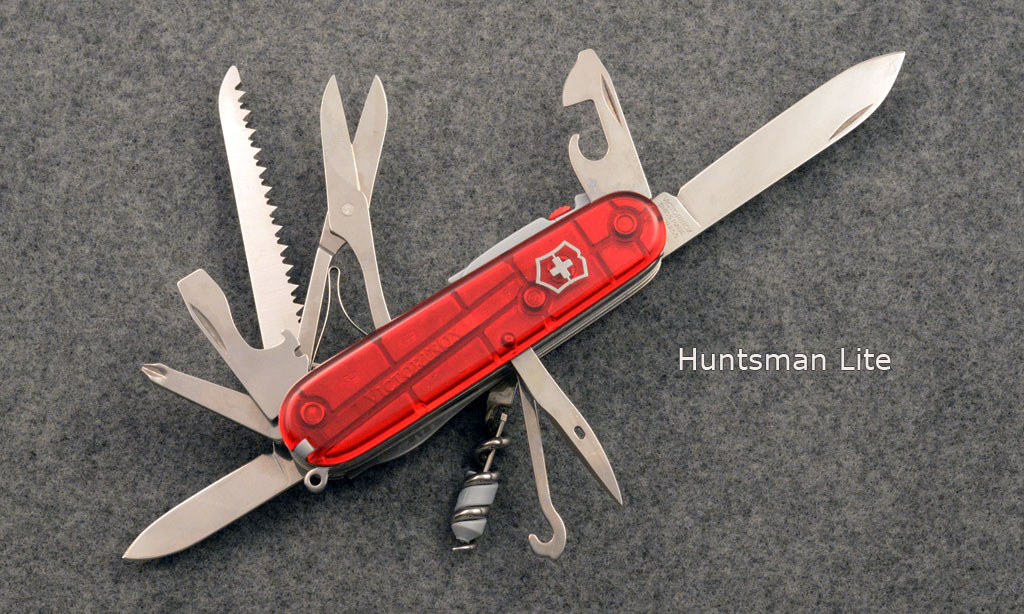 The Victorinox Huntsman Lite is a 5-layer 91mm Swiss Army Knife.
This is one of the newer Lite  models adding a white LED light and in-line Phillips screwdriver layer, fine screwdriver and additional scale tools to the already well established and equipped Huntsman.

In September 2006 Victorinox produced a special limited edition of the Huntsman Lite with plus scales and a mini-screwdriver (see images above). The knife is numbered nnnn/1111, on the liner behind the corkscrew. It came in a 8" x 6.5" plexiglass and aluminum hinged presentation case. The knife is tucked inside the pocket of a 4" x 6" piece of what appears to be a swatch of denim, and attached with a metal chain from the knife's key ring to the belt loop of the the 'jeans', which hold a decorative leather belt.
The presentation case also contains two Swiss postage stamps, one of 100 centimes, picturing the 1890 Soldiers Knife, and the other 130 centimes, depicting the new ruby translucent Huntsman Lite, such as the one in the case. The stamps are mounted on a small metal plaque (2.25" x 3.25") and 'postmarked' with a 'first-day-of-issue' stamp - in German, French, and Italian, with the date '2nd of September 2006', and 'Ibach 6438', 6438 being Ibach's postal code. The plaque is also stamped nnnn/1111, matching the number of the knife.

Several photos on the internet incorrectly showed the Huntsman Lite as not  having the fine screwdriver, so there may be some early models without that tool.