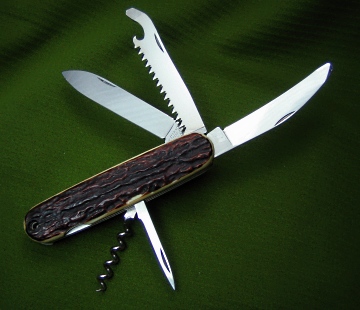 The Victorinox 108mm Hunter, also known as the Safari Hunter, was part of the Safari Series. This model added a gutting blade and imitation stag antler scales to the Safari Trooper.

Name disambiguation: There is also a 111mm Hunter that features a locking blade.

The 108mm saw had a reputation as one of the best wood saws, although tests conducted by MTo members have questioned this.

The Hunter and other 108mm knives do not have any non-blade tools such as the typical toothpick and tweezers.
This is typical of the military knives, but rare for the civilian knives.

The color of the red Nylon scales appears in two shades, a darker deep red, and a much brighter red. Some knives may have different shades of red on each side of the knife.

All the Victorinox 108mm knives are related to the original GAK, which was the first 108mm knife that was manufactured to a specification, and under contract, for the German Army.