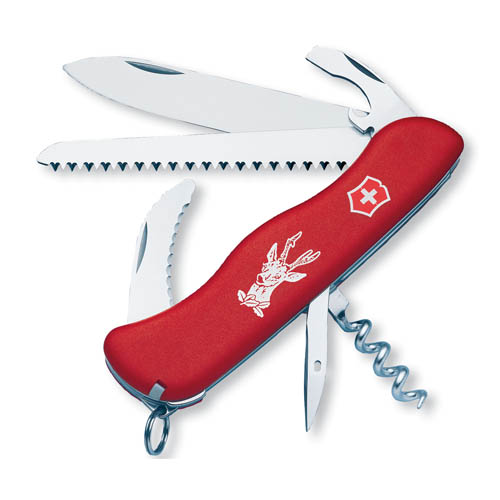 The Hunter is a 111mm liner-locking Victorinox Swiss Army Knife. This model includes a small curved gutting blade with a serrated edge, as well as the 111mm version of the Combo Tool (openers/screwdriver), neither of these tools are very common.

The original version of this model was slide-locking. Given that this model loses the regular opener layer it is quite light-weight for its capabilities, particularly the slide-lock version.

It has been available with various different scale options (red / green / camouflage). A Phillips screwdriver variation has also been available.

Name disambiguation: There are many models with the Hunter name.
The 111mm Hunter XT/XS models, the 108mm Hunter/Safari Hunter, the more recent Hunter Pro and several Wenger models.

Standard red, also olive drab (military) green synthetic scales, with a screen-printed image of a deer on the front handle. It is also available with camouflage coloured scales (2008), without the deer image. Early versions did not have the deer image printed on the scales.

In 2017 Victorinox completely revised their 111mm product line and ceased production of slide-lock models, the Hunter was converted to be liner-locking as part of that change.

US Model Numbers; (in brackets above)

Various other models feature a longer gutting blade and/or the Hunter name!