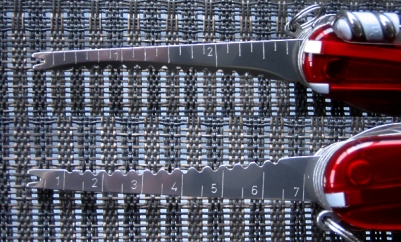 The fish-scaler tool is a multi-purpose fishing tool only available on some 91mm models. The ridged bottom edge of the tool is the fish scale remover. The tip is a U-shaped fish hook disgorger used to safely remove a hook from a fish's mouth. The tip is magnetized on some versions, empirical evidence suggests that those models were manufactured prior to 1985.

On the back side of most of these tools is a ruler with gradations most commonly in inches. Later versions have a metric scale on one side and an imperial scale on the other. Very early versions of the tool do not have any ruler markings.

A novel usage for the fish-scaler is for Halloween pumpkin carving; the wide serrations are apparently ideal and because the tool is safe for younger carvers it might even be the best suited tool for the job ever. The shallow serrations can also be useful on soft materials, like styrofoam, that could clog up a sharper saw.