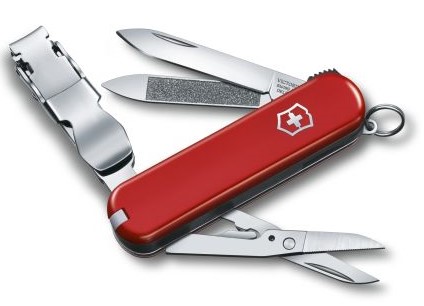 The Victorinox NailClip 580 is a 65mm Swiss Army Knife that is the Victorinox version of the Wenger Swiss Clipper.
It contains a traditional nail clipper that is cleverly folded into the frame of the knife.
It is available in classic Cellidor red and transparent red, or wooden scales.

The NailClip Wood 580 version features ‘Evolution’ scales made from Swiss walnut (pictured above)   Note: No toothpick and tweezers in this variation.
The SwissGear version features the Wenger logo framed by the words Swiss Gear. Available in a grey/black and red/black variation, it is believed that Victorinox released a limited number of these in 2020 for trade-mark protection of the logo.

Victorinox ceased production of Wenger Swiss Army Knives in 2014 , however they decided to continue manufacturing of some of the former Wenger knives under the Victorinox 'Delémont' brand. This is one of them.