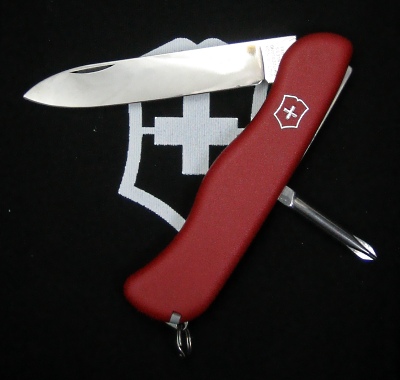 The Cowboy is a fairly rare 111mm Victorinox Swiss Army Knife with only a single tool layer. It was one of the early 111mm models and can be found with early tang stamps, and the Phillips screwdriver with the can-key.
Reported to be discontinued, however in 2010 it started appearing for sale in Switzerland.

The Cowboy is an older model which has been retired for some years.
Note: Although reported retired, it appeared for sale in Switzerland in 2010, so it might not have been completely retired. It was still relatively uncommon.

As of 2017 Victorinox only produce liner locking 111mm models, so the Cowboy is now fully retired.