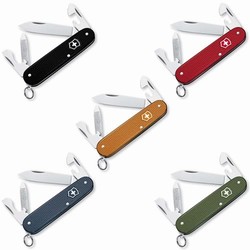 The Victorinox Cadet is a popular 84mm two-layer knife with alox scales.

Using metal scales (handles) and only two layers makes the Cadet very slim at only 8.3mm. Adding to its popularity has been its availability in a variety of attractive colors, using colored anodizing of the handles.

The original Cadet model had a small blade instead of the nail-file, but this configuration is now referred to as the Cadet II, even though it predates the current tool configuration!

Typically textured silver alox, however Cadets have been produced, and continue to be produced, in many, many different alox colors, some as limited editions.
Victorinox produce their own colours, and their dealers also create their own editions. See Varations below.
Cellidor scaled versions have also been available.

Early model Cadets have a horizontal 'ribbed' or straight line styling on the exterior of the alox scales (see picture below). They came in both red and silver alox, the emblem was red and looked similar to a Swiss shield. The original Cadets had a small blade instead of the nail-file. This configuration was later referred to as the Cadet II - even though it is really the original tool configuration!
In 2018 Victorinox changed the design of the working surface of the 84mm model nail-file - ie for the Cadet and Sportsman models. Previously it resembled the 'textured surface' nail-file on the Classic, following the change it reassembled earlier 'grooved/cut' nail-files.

US Model Numbers: (all Alox)