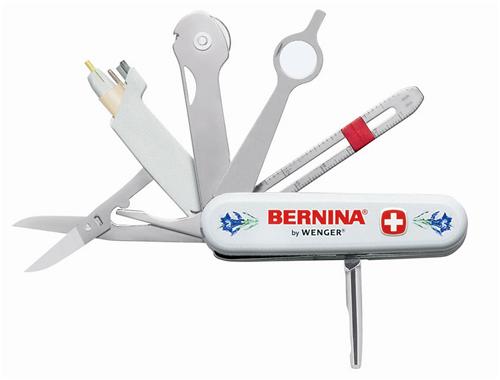 The Bernina 504 (also known as the Bernina Swiss Sewing Knife) is an 85mm 5-layer Wenger Swiss Army Knife produced in collaboration with the Swiss sewing machine manufacturer Bernina.
It has a number of unique implements designed specifically for the tailor or seamstress.

The model 504 has no conventional knife blade. Instead it has a large number of sewing related functions, several of them exclusive to this knife.

Another feature exclusive to the 504 is a removeable seam guide/ribbon guide/elastic guide. It has both an inch and metric scales, as well as a small plastic slider which acts as a guide.

Housed in the folding plastic carrier are a number of items, including a needle threader, an embroidery wand, and a two-piece needle inserter/thread ripper/textile marker. Spare textile marker refills are also housed in the carrier.

The instruction sheet included with the Bernina 504 pictured here was dated 08/04.
In the 2008 Wenger catalog, the name is listed as Bernina Swiss Sewing Knife.

Due to its unique set of tools there are no similar or related models.
However Bernina and Wenger also collaborated on a 65mm SAK, the Bernina Mini Spot Light.