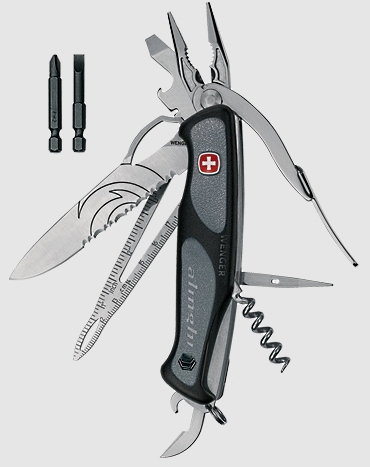 The Wenger 130mm Ranger Series of models are the largest Swiss Army Knives manufactured. They were introduced in 2007 and evolved from the earlier 120mm Ranger Series. Following the Wenger corporate strategy, the series provided many models that were designed to be well-suited to outdoor living and adventures.

The New Rangers were originally produced with solid cellidor handles, contoured in the Evolution style to fit the hand and with deep checkering moulded into the thumb area on both sides. They later became available with rubber inserts in the handles - the RangerGrip series. Different colour options were also available. The Rangers did not have toothpicks or tweezers.

The series also introduced some new tools such as the folding pliers, and the bit-driver in the handle. The elegant folding plier mechanism narrowed the gap between the original multi-tool (the Swiss Army Knife!) and the more recent full sized plier-type multi-tools introduced by other manufacturers.

All the models feature a robust and secure liner-locking main-blade, with an easy to operate push-button release under the Wenger logo in the handle. The large flathead screwdriver features an automatic locking system that locks the tool open when pressure is applied. This is the same mechanism used on the 85mm Wenger knives.

The series was originally also classified as a 120mm frame size, and known as the New Ranger series, however these models have a nominal size closer to 130mm in length. SAKWiki started using the 130mm classification in 2012, after Wenger and Victorinox started using 130mm in some documentation. This also simplified the complicated classification of Wenger models! In 2013 SAKWiki stopped using the term 'New Ranger' - and now simply refers to these models as Rangers  and/or 130mm Rangers, although the name still appears in some pages.

For an overview of the model and tool configurations see the Tool to Model Matrix.

Since the merging of the Victorinox and Wenger product lines in 2014 - all of these models are withdrawn, however some are still available as Victorinox Delémonts.

Wenger gave different model names/numbers (as opposed to a suffix, for example) for slight variations in the Ranger configurations, resulting in the plethora of model names below, which can be very confusing for the user. Whilst technically every model is different, in practice, only a few factors make the difference between the various models. These being:

Of the sixty or so models listed below, if the first three items above did not determine a new model number - There would only be about twenty model numbers!

To view the differences between the models, the Wiki user is advised to check the Model and Tool Configuration Matrix, the layer breakdowns in the links above/right and, of course, the individual model pages themselves. See also the notes on numbering conventions below.

The list below indicates whether a specific model number is a variation on, or alternate name for, another model.

* - Indicates that the model became available with RangerGrip scales - See below.

The RangerGrip series was introduced in the Spring of 2009, after being shown at the SHOT Show a few months earlier.
These models came with a new scale design featuring rubber sections in the handles for better grip.
They were made available for popular models in the 130mm range - these models are indicated with an asterisk (*) in the list above.
The 'Grip' scales also became available for some of the 85mm line.

A few new models were also introduced that were only available with the RangerGrip scales.

The Wiki user should also be aware that there seems to be no logic  in the numbering of the Wenger Ranger models!   ;-)
A larger number sometimes indicates a larger (wider) knife, but sometimes a smaller one, and sometimes the same width!!
The 52/53, 55/56, 57/58 and 74/75 model pairs have equivalent tool configurations, adding one to the model number indicates switching from corkscrew to Phillips; yet for the 60/61, 78/79 the convention is reversed! The number 7 seems to indicate the presence of a one-handed blade (78,79,178,179); yet elsewhere it seems to indicate pliers (73,74,75, 176,177).
One convention that does seem to hold true, is, if the first digit is a 1 (ie. 1xx), then the model is a serrated blade version of the xx model !