Victorinox reports: "After hardening at 1,040 degrees and tempering at 160 degrees, the blades have a hardness of RC 56 (RC = Rockwell C, unit of hardness)."
To resharpen the blades, Victorinox recommends using a honing stone, as the alloy from which the blades are manufactured is too hard for a honing steel.

Some 74mm Swiss Army Knives (such as the Executive) have a large blade and small blade combination like their 84 & 91mm siblings, others (such as the Ambassador) have a single blade like their 58mm siblings.
The 74mm Executive and Director also contain this unusual Orange Peeler with Screwdriver Tip blade, which is a very unique tool, found only on these two models.
See also: Orange Peeler Tool Page

Most 84mm knifes have a large blade. The large blade is almost as long as the knife itself, with a cutting edge of 52mm that uses a standard v-grind, with a drop point tip.

The small blade is found on several of the 84mm knifes. Its shape is very similar to the large blade, with a cutting edge of 35.5mm.

All 84mm SAKs prior to 1973 had a clip-point style small blade.
However this design was dropped in 1973 in favor of using the drop-point design - in line with the main blade.
Some Victorinox manuals and catalogs refer to this as an Angle Blade.

A small 'pen' blade is present on some 84mm knives like the Pocket Pal. This blade is thinner than the small blade and has the shorter profile of a pen blade.

A small sheepsfoot blade with a special insulation cutting/wire scrapper edge near the tang. This blade is quite rare on 84mm knives.
Usage Guide.

Most 91mm knives have both a large blade and a small blade. The large blade is almost as long as the knife itself. It has a standard v-ground edge, 58mm in length, and a drop point tip. The large blade comes in a straight-edge, serrated-edge, and in a very few knives a combo or partially-serrated edge, where approximately half of the blade starting at the tip is straight and the remaining edge to the tang is serrated.

The Victorinox Baker's Knife, also known as the Bäckermesser (90.25mm) has curved serrated blade, it's unique to this knife.

The small blade is found on most 91mm knifes. It shape is very similar to the large blade, and has a cutting edge of roughly 36mm.

All 91mm SAKs prior to 1973 had a clip-point style small blade.
However this design was dropped in 1973 in favor of using the drop-point design - in line with the main blade.
Some Victorinox manuals and catalogs refer to this as an Angle Blade.

Fairly uncommon today, a small pruning or hook blade was available on some 91mm knives.
See picture below of the 93mm version of this blade

A small sheepsfoot blade with a special insulation cutting/wire scrapper edge near the tang. This blade is very rare on 91mm knives.
See picture below of the 93mm version of this blade
Usage Guide. 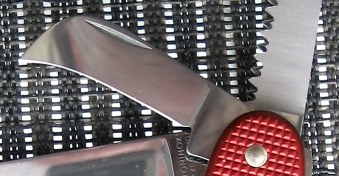 The 93mm (Pioneer) range of Swiss Army Knives all contain a large main blade which is thicker and longer than its 91mm counterpart. This blade is good for tough work and of course is the blade found in the Soldier 1961.
Victorinox have also referred to this range of SAKs with their tougher, thicker tools as their 'sturdy' range

A small pruning blade available on a number of 93mm alox knives.

The 130mm line of Victorinox Delémonts models inherited the large blade from the 130mm line of Wenger New Ranger knives. The large main blade is liner locking and uses a push button on the handle scale to push on the liner and release the lock.

It comes in nail-nick or one handed opening versions and also plain or partially serrated.

A Locking System is a mechanism to lock a knife blade, or other blade tool, in the open or fully extended position. Once locked open, to fold the blade closed requires the activation of some lock release. Knives that contain a Locking System are often refered to as Lock Blades, and are often treated differently in government knife regulations. Locking Systems used on Swiss Army Knives are described in Knife Blade and Tool Locking Systems. 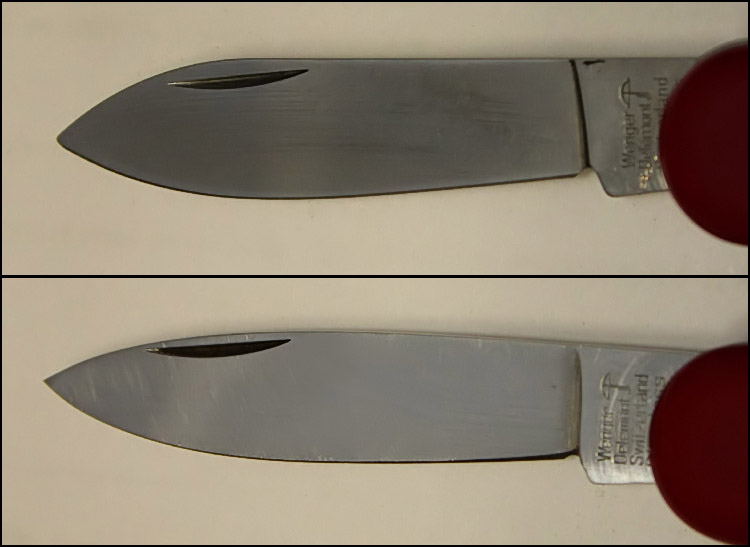 The Wenger 85mm main-blade has had at least 2 variations.
The current blade has more of a belly than previously.
In the picture the top image is the current design (yyyy and later), with the bottom image being an older design.